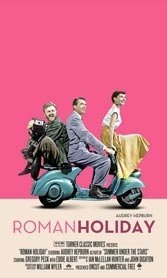 On paper, William Wyler’s romantic comedy couldn’t be more clichéd: While on a European goodwill tour, a pretty young princess eludes her royal shackles and goes on the lam in a big city with a handsome American reporter nipping at her heels. Usually sheltered, the princess “elopes” for a day; usually a hack, the reporter has a chance to transform serendipity into a big-bucks interview.

Now, fill in the blanks: The city is Rome, circa 1952; Ann, the frolicking but upright princess, is Audrey Hepburn, in her first Hollywood starring role (she was 23), and Joe, the opportunistic but finally smitten reporter, is the ever-stylish but equally upright Gregory Peck (then in his late 30s). Star and city transform a simple Hollywood fable into a memorable story about unexpected affection, a man for woman, a woman for man, and both for a city. It dodges overt sexual innuendo and a host of potential distractions to portray a romance that develops awkwardly, as many often do. “Mr. Bradley,” says Ann on the Spanish Steps, nipping on gelato after a mischievous haircut, “I have a confession to make: I ran away from school…” School is her country’s Rome embassy, and the rest of the runaway is a funny and often poignant postwar travelogue.

Hepburn’s Princess Ann and Peck’s Joe represent something precious: sexy wholesomeness that’s provocative because it’s tentative, with boy-girl looks that matter because they’re growing in importance before your very eyes. There may be no sweeter and sexier “hello” on film than Anne’s to Joe as the two dance on a barge in the shadow of Castel Sant’Angelo as they’re falling in love. Nor as bittersweet a farewell line as Ann’s, “Rome, by all means Rome,” when asked her favorite tour stop. In fact, Wyler’s final scene is homage to the power of heartfelt gazing.

Eddie Albert is delightful as Irving, Joe’s make-a-buck photographer who nicknames Ann as “Smitty” and gets his own share of one-liners: “We can’t go running around with a hot princess…” “Hot” then meant “stolen,” which shows how language and sexual mores have changed. What hasn’t, aside from traffic patterns, is the spell cast by Rome.

The acting choices are lucky as the screen chemistry, in that Ann was written for Elizabeth Taylor and Joe for Cary Grant; thankfully, both declined.