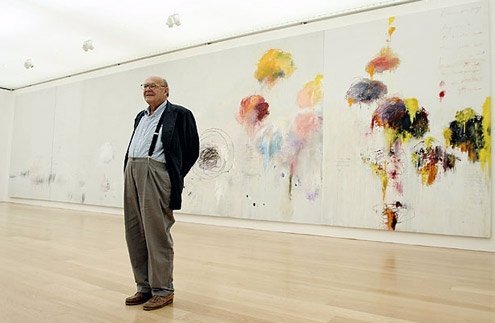 Twombly at a Rome show a year before his death.
U

In 1957, Edwin Parker “Cy” Twombly, Jr. bid adieu to postwar America and pop art and made Italy his primary residence. He had first visited the country with Robert Rauschenberg in the early 1950s while on an eight-month swing through Europe and North Africa. By the time Twombly settled in Rome almost a decade later, the Italian capital had become a cultural hub populated by artists, writers and directors. The fabled Cafe Rosati in Piazza del Popolo swarmed with intellectual luminaries.

Twombly immediately fell for Rome’s romantic ruins and the tone of Mediterranean culture, which evoked the faded grandeur of the American south. He began producing abstract paintings that introduced antiquity, history, Romanticism, poetry and myth into contemporary art. His canvases make reference to Bacchus and Rilke, the Battle of Lepanto and Keats.

“Olympia” was among Twombly’s first Rome paintings, produced in the summer of 1957 in an apartment overlooking the Coliseum. Floating amid a hectic network of pencil and crayon scribbles are the words “Roma” and “Amor.” Twombly would later scrawl “Roma” on many a canvas.

At the time, Rome’s art scene revolved around two haute galleries, Galleria La Salita and Galleria della Tarataruga, where he had his first Rome exhibition in 1958. It was the same year that the Galleria Nazionale d’Arte Moderna hosted the Jackson Pollock retrospective that was then touring Europe. When Pollock died in 1952, Twombly was hailed as the “heir apparent” to Pollack’s legacy of abstract expressionism.

Twombly spent the summer following the La Tarataruga show in the whitewashed coastal town of Sperlonga where he drew the 24 sparse landscapes that he called “Poems to the Sea.”

“The Mediterranean,” he told British art critic David Sylvester, ” … is always just white, white, white. And then, even when the sun comes up, it becomes a lighter white.”

In the 1960s, Twombly turned to large-scale works. Most were produced either in a studio he rented on Piazza del Biscione or the lavish Via Monserrato apartment he shared with his wife Tatiana, an aristocrat and artist, and their son Alessandro. A 1966 a Vogue magazine article lambasted both Twombly’s lifestyle and his opulent central Rome digs tucked away near Campo de’ Fiori (the report was illustrated by fashion photographer Horst P. Horst). Vogue insisted Twombly had “fallen for ‘grandeur'” and had “betrayed the cause” of the avant-guard.

American critics were also confounded by Twombly’s art. Roman living stoked the sensual side of his imagination, and his painterly response led to a baffling swarm of phalluses, lady bits, ancient graffiti, and classical nostalgia that came across as both erudite and crude. In his Rome paintings, art critic Rosalind Krauss, a student of Pollock’s work, saw “so many cocks and cunts, so many wounds and scorings, so many tatters played over the surface of the work, the erotics of which is that its body will never be reconstituted, whole.”

“Nine Discourses on Commodus,” painted after the assassination of John F. Kennedy in 1963 and now considered a highlight of Twombly’s oeuvre, met with a disastrous reception when they were first exhibited at New York City’s Leo Castelli Gallery in the 1960s. “In each of these paintings there are a couple of swirls of red paint mixed with a little yellow and white,” wrote artist and critic Donald Judd. “There are a few drips and splatters and an occasional pencil line. There isn’t anything to these paintings.”

Twombly had always worked at his own leisure, and after the reviews his production dropped off. Publicity-shy long before his ill-fated 1966 opening to Vogue, years would pass before he again granted an interview.

In the 1980s, Twombly bought a hilltop home in the medieval town of Gaeta between Rome and Naples. Its rooms had breathtaking views of the Mediterranean. Once the playground of ancient Rome’s elite, Gaeta was a frequent getaway for the Roman emperor Hadrian and is the burial place of the poet Cicero. “Catullus had friends here,” Twombly told Vogue in 1994, finally breaking his silence. “It was kind of a summer art colony, like East Hampton, but not anymore — that was 2,000 years ago.”

Twombly’s “Arcadia,” like “Olympia,” dates back to the artist’s 1950s Rome period and through September 25 hangs next to Nicolas Poussin’s “The Arcadian Shepherds ” at London’s Dulwich Picture Gallery as part of an exhibition titled “Twombly and Poussin: Arcadian Painters.”

Poussin, a classical French painter who worked in the 17th century, was just as enchanted by Rome as Twombly. He wiled away days painting and meditating on ancient myths and ruins. “I would’ve liked to have been Poussin, if I’d had a choice, in another time,” said Twombly.

He never saw the show, which opened in late June, just days before he died in Rome at age 83.