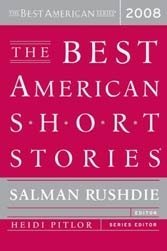 he year 2008 was a roller coaster ride — a scary one into collapsing economies, crashed dreams, and then, in the United States, an unforeseen, volcanic surge of grassroots hope. All in all: a pretty mixed trip.

But for the North American short story, 2008 was the best of times. The annual Best American Short Stories far outshines its recent predecessors. General Series Editor Heidi Pitlor of Houghton Mifflin sets her usual bar of good sense and taste. And with world’s author Salman Rushdie as special 2008 Editor the final cut choices take on fresh sparkle. Perhaps reflecting his own ability to view any tale through a prism, lightly.

So here they are: 20 fresh and vigorous examples of how and why a short story operates. These brief prose fictions cast swift, piercing glance into our inner and outer landscape. “This story,” we say to ourselves, “really doesn’t give the exact picture, or at least not the complete one. And yet: its small, brightly imagined fictional world points startling insight to our own.”

And, by the way: the short stories in this collection are also very American. For despite its multigenerational, multiethnic and myriad-style authors, this “Best” reveals the kind of stories we North Americans have always delighted in telling. These are inventive, often stunning variations on those short stories, legends, tall tales, anecdotes, parables, and fables that flavored our oral history … as well as our rich 19th century production of magazines and newspapers. And let’s confess: doesn’t even the new (?) minimalist prose craft trace root to the suggestive reticence of so many frontier accounts and sketches? Seems that telling stories is just one of the things North Americans do best So the selection joins both Canadian and Stateside authors. Isn’t it, really, just an inked line on the map that divides us?

BE TEMPTED TO ENJOY. Here’s quick sample from the 2008 winners, this reviewer’s “best-of-the-best” short story authors:

Katie Chase. Her first-ever publication selected for reprint: “Man and Woman.” Realistic in detail, it’s also low key fable about any American small-town. But one where child-brides are ritually contracted to marriage with older men. Between hopscotch and playing with Barbie dolls, small girls learn serious marital rules concerning investors and beneficiaries. Feeling a little bewildered? Wouldn’t this tale better fit an Islamic setting? Certainly not an oak-shaded American township? Maybe. But the capital investment system is certainly ours. A knockout story.

Novelist Steven Millhauser trots out some of his best magical realism in an antic tale of what Thomas Edison might-just might-have invented. IF: that “Wizard of West Orange” had moved beyond mere sight and sound to the realm of touchy-feely-feely: “a sensation of shouting with my skin… of being stroked by the wing of an angel.”

Karen Russell keeps the Gothic scare-tale alive and well in “Vampires in the Lemon Grove.”

Nicole Krauss offers “From the Death of Daniel Varsky.” Frankly, for this reader a Krauss novel, her long work, has so much technical machinery it creaks. Full of what Rushdie generally calls the writing schools’ “creative writingese.” Whereas her short work-like “From the Desk…” — succeeds because of her excellent craftwork. Her skill avoids melodrama — as she delicately shifts protagonist role from Daniel to his desk. A technical tour de force and memorable tale.

This year’s “Best” has too many author names and fine stories to hit them all. It’s a pleasure to find the incomparable Tobias Wolff once more visiting the attic of his protagonist’s mind. Fun to revisit authors — like T.C. Boyle — whose latest novel you’ve been meaning and meaning to read.

In short, short fiction is in healthy and near inexhaustible supply in North America. Could be a sign that our exuberant, creative national roots haven’t yet withered.