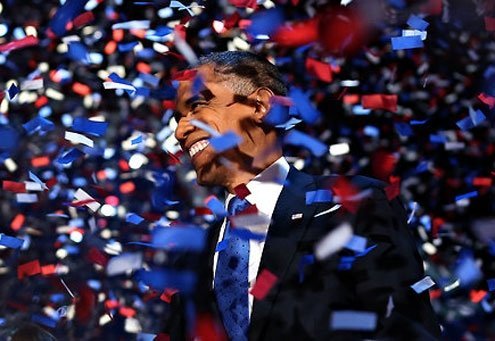 We have picked ourselves up, we have fought our way back.
T

he curtain has fallen on the yearlong theatrical run that is American presidential politics. The incumbent won — clearly — and the challenger lost — also clearly, rounding out an exhaustive and extravagant love affair with a result-oriented political competition that went terribly awry in the final, havoc-filled months of 2000.

Americans are temperamentally fond of clear outcomes. In the 1960s, a major TV network rolled out a catchy sports slogan, “the thrill of victory and the agony of defeat,” whose winner-take-all slant led to the installing of overtime periods and tiebreakers to ensure no U.S. professional game ended in a draw. The mobilization against “nonresults” helped turn presidential races from old school tussles into a fan-driven Super Bowls complete with their own sophisticated arithmetic and color-codings.

Yet this time around, conditioned in part by ongoing media deference to Hurricane Sandy, the result elicited only modest stirrings, and certainly few hints of either thrill or agony. Yes, Team Obama (“We have picked ourselves up, we have fought our way back…)” narrowly bested Team Romney (“I wish all of them well…”) in what amounted to a clever game of electoral hopscotch. But nowhere was the sense that the battle’s inspirational fever would endure much past its literal conclusion.

Winter is coming, and with it sobering realities.

The American economic recovery — or so it’s billed — is a borderline reality at best, with too many of the country’s best and brightest still weighed down by college loans, some worth more than a lifetime of work can realistically recover. American college graduates are Third World debtor states by another name. Since debt is crippling, if not indenturing, those who feel its full weight are clinically vulnerable to distraction and depression, if not despair.

The mortgaged life dispenses with idealism and puts yes-men (and women) ahead of freethinkers. Income is paramount, with even the modestly affluent held hostage. The sweep of daydreams slackens. Realities such as these — and there’s catalogue full of them — can cramp thrill’s style, and do.

Angela Merkel, the beloved or benighted German chancellor, recently spoke the obvious: that repairing the damage done by more than a decade of state overspending — which made life seem like a breeze for some but not all — will require at least another five years of tinkering. Redress is a slow thing. She continues advocating restraint and cutbacks. Others seek repair through opposite means, namely spending and investing to generate more of the same. The European stalemate is going nowhere soon.

Nor is a single European leader considered ascendant, or even charismatic, since most EU citizens have come to recognize that mere mortals, however charming, can’t, or won’t, undo the economic status quo.

Even in the United States, whose 2008 “Yes We Can” mood seemed briefly to restore the foundations of idealism, now faces a chorus of “meet the new boss, same as the old boss,” which some will welcome and others will mock, but few will have either the time or inclination to toast for too many nights running.

The just-ended campaign was spiteful on both sides, with civility tuned out in favor of a now-normal culture of partisan invective that uses venom for fuel. Like-minded people form posses of shared snarl to then infect and provoke the connected landscape. The “don’t hate the player, hate the game” excuse, a kind of “war is hell” applied to politics and politicians, still puts undue emphasis on hate.

Thankfully, the presidential crescendo will now abate, if only for a while.

What the newest old boss will do with his second term is straightforward, at least in policy terms. Health care and taxes remain contentiously incomplete projects (as is job-creation). The national debt, a visible representation of the more insiduous student loan problem, will keep Americans screaming for years to come. To some, America leads without thriving; to others, it thrives without leading. To a smaller group, politicians, even presidents, are nothing but actors in the greatest sideshow on earth.

In Italy, the U.S. presidential morning-after seemed to generate modest relief, though few were ever seriously invested in this latest spectacle. George W. Bush is still remembered for starting wars, while Obama, given the tenor of his first four years, seems like a man not easily agitated, an appreciable gift in a world that loves the sound of its own howling, maybe because it can now hear itself better than ever before.

“Let’s work together against the crisis,” said Merkel in applauding the American election result. Yet there’s no getting around that word, crisis, since Oh Beautiful’s “sea to shining sea” now covers not just the territory between American shorelines but all the land on earth.