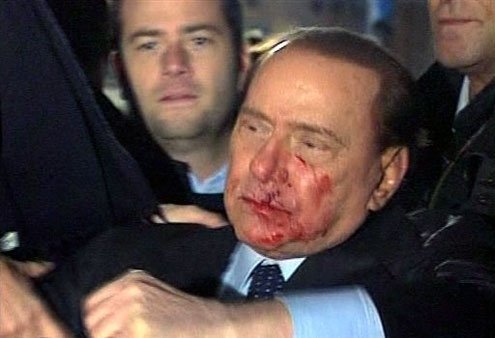 Bloodied but unbowed.
A

broken face is no joke, particularly among Italian men. The Anglo-American movie legacy of fistfights, gunslingers, pub brutes and pummeled boxers is mesmerizing in part because Italians usually stop short of physical violence.

Muss and fuss matter enough not to disturb. Looks and grooming are not only essential to self-esteem and narcissism but help frame social status. Even nonconformists pay attention to facial tidiness. Italy was the first nation on earth to perfect male stubble.

All the more reason to understand why images of Prime Minister Silvio Berlusconi’s bleeding face produced immediate visceral shock. Italians confronted a rarity: a major figure hurt and humbled in public. Satirist Sabina Guzzanti, a specialist in Berlusconi imitation and mockery who rarely drops her guard, sized up the empathy. “Seeing him made me profoundly sad,” she wrote. “I saw that bloodied face. I saw an old man injured. When he got out of the car to try to see his assailant, I respected his pride. I saw a politician, maybe for the first time.”

Drama has long been boastful Berlusconi’s greatest specialty, with humility ostracized as weakness. But his suddenly pulpy face forced him down a notch. He was compelled to literally take it on the chin for a country to which he’d rhetorically martyred himself for years. Reality collided with rhetoric by chance.

Conspiracy theories aside, the event itself was simple enough: A deranged man threw a jagged souvenir at Berlusconi’s face from close range, opening deep wounds and breaking his nose and teeth. Berlusconi spent four nights in a Milan hospital. The incident supplied the most vivid photos of a stunned and hurt political leader since the 1981 assassination attempt against President Ronald Reagan.

Since populist Berlusconi has always basked TV-host style crowd contact, the risk of an up-close attack always existed. But his survival instincts after the incident were astute. Fiuto is the neat Italian word, “smelling out” what to do next. He said little.

Since Italy depends on the aesthetics of virility and style to fill in for its strategic shortcomings, appearance is a central calling card. Shattering it is sacrilegious. Berlusconi let his humbling play out. He wasn’t trivial. He wasn’t defiant. He assumed the sympathy he in fact received without seeming to demand it.

Italy’s stiff upper lip is far softer than Manchester’s or Miami’s. People see the inflicting of public hurt as an apolitical affront to dignity, particularly if the victim is defenseless. Since politicians are generally seen as amoral figures, only a shocking event produces genuine sympathy. The Red Brigades and other urban terrorist groups ultimately failed because systematic violence, whatever its ideology, has no wiggle room. Italy rejects it. Only the Mafia and its underworld spawn are tolerated as known, in-house cancers.

The final piece of the puzzle was Berlusconi’s baby-faced age. Vanity surgeries have largely neutralized his wrinkles. At 60 he worked to look 50, nearly succeeding. At 70 he tried shaving off a decade, again nearly succeeding. While his foibles amuse some foreigners (and enrage the British), they get little more than soft giggles in Italy. Vanity can’t be faulted here. Not when age has legitimate and proliferating antidotes. Few women voters will fault a man who cares enough to stave off age and work to improve his appearance.

The attack suddenly broke up Berlusconi’s carefully-orchestrated face. But instead of bundling himself into friendly confines of his limousine, he behaved more like a floored and dazed boxer. He got out, eager to pretend it hadn’t happened, or to see who’d done it. By doing so, he showed supporters hadn’t been shot or critically injured. In that masterful second, he put his broken face into macho folklore. No mistaking it: the old guy was bloodied but unbowed. Now, he can repair the damage.

Say all you wish about Berlusconi’s corrupt billionaire shortcomings. But his Milan turn was a composite of The Duke, Fidel with a measure of “Raging Bull.” More to the point, it wasn’t contrived. Blood loss may be a high price to pay for seeming to step out of your own cartoon, but Berlusconi politely picked up the tab. As a result, he added a dramatic page to his already rich and tormented biography.