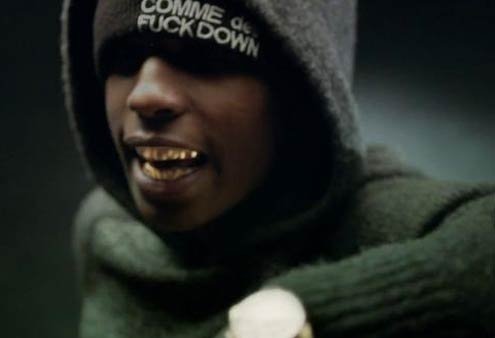 e’re barely a month into 2013 and already we’ve got what deserves to be one of the most talked-about records of the year by one of the most talked-about artists of the past few. In my mind is 24-year-old New Yorker Rakim Mayers, best known by his Harlem hip-hop avatar A$AP Rocky. After several release date delays (standard for the genre these days), Rocky’s major label debut Long.Live.A$AP (Polo Grounds/RCA) is finally, officially out.

The reactions have been as divisive as expected, but we’ll get to those in a moment. Here are the facts: A$AP Rocky had been a two-bit drug dealer in the Bronx before focusing full time on his rhymes. “Purple Swag,” an Internet-only download, garnered considerable Internet buzz in mid-2011. This led to follow-up hit “Peso,” which received even more attention and fueled a label bidding war that resulted in a stunning $3 million contract with Polo Grounds and RCA.

Everything else about the guy is up for debate.

Noisy dissenters attack him from every angle. Their key points, in a nutshell:

Long.Live.A$AP is not the album to change those peoples’ minds, but that’s also the best thing about it. Rocky’s first full-length, 2011’s free mixtape Live.Love.A$AP, was annoying for explicitly laying out his plan of attack, but at least you weren’t left guessing whether or not he was copping moves from the cloud-rap cognoscenti (he was) or paying homage to DJ Screw every bit as much as hip-hop’s birthplace (he was). It felt necessary.

Long.Live.A$AP doesn’t. It’s so revolting to purists because it embraces their hate and its own emptiness, skipping past the “struggle” narrative so omnipresent in hip-hop and shortcutting to the part where we usually stop caring about rappers: the part where he’s already won. It’s a victory lap without a race.

Which should be incredibly easy to hate, except that A$AP Rocky does this better than anyone. He’s young, rich, proud, and incredibly successful without much of a music career behind him, and that success is all he raps about. His focus is singular. He’s managed to build a persona (“brand” would be more appropriate) entirely on artifice, which is fascinating on one level because he’s outright rejecting years of conditioning in hip-hop here by avoiding complex wordplay and keeping himself out of his raps. He’s a personality without personality. On another level, it’s the truest representation of who he is right now. That’s even more stunning.

Does this bother you? Of course it does. You didn’t get a $3 million endorsement for roughly six minutes of audio. You’re not hobnobbing with Drake or Kendrick Lamar or 2 Chainz or practically every other hip-hop luminary of the past two years. You can’t afford Gucci F/W 2013. You want to see the battle scars and know the struggle and hear about something that is relevant on a human level. You want dues paid and respect earned.

Well, I got news for you: A$AP Rocky doesn’t, and that’s refreshing. You don’t like him? Your loss. A lot of critics and fans seem to have forgotten that rap used to thrive on slaying the father, biting the hand that feeds, burning effigies of the past — it didn’t matter how. Long.Live.A$AP remains true to that ethos, at once an implicit love letter to Houston screw, Dipset, and the Internet and, simultaneously, a swift dismissal of all antecedents. There is no history but the one you hear before you.

A$AP Year Zero looks ugly from the outside, but it’s a beautiful view from behind those rose-tinted glasses. Reconciliation is impossible, but that’s the ideal document of hip-hop three years into the decade. That’s the conflict.