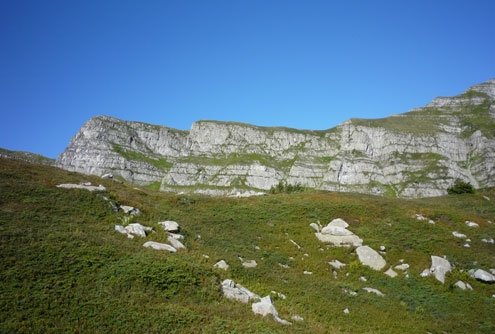 Monte Giovo, near Monte Rondinaio, can seem imposing. Photo by Andrea Smith.
I

stand in a boggy patch of rosebay willowherb, robust wildflowers that are almost as tall as I am. Bees sing around me, gathering nectar this early August morning. The lake water of Lago Baccio laps its reedy shoreline. There’s not a wisp of cloud. A clear blue sky frames Monte Rondinaio while nearby Monte Giovo’s craggy ridges tower over berry-laden slopes.

Marino and I have driven from Pievepelago to Lago Santo Modenese, towns in Modena province in the Emilia region. Having left our car in the parking lot near Lago Santo lake (1,501-meters), we’ve already walked for 30 minutes on trail n. 523 through beech and fir woods to Lago Baccio (1,554-meters).

Now, the path to the right narrows and leads around the small, circular lake to open fields and clumps of trees. We’re climbing Monte Rondinaio (1,964-meters) in the Parco Regionale del Frignano. The mountain straddles the border between Emilia and Tuscany and offers a spectacular panorama. The climb is gentle, though higher up it gets steep.

“You need willowherb for stinging nettle,” I call out. “But it’s down by the lake.”

“I need long pants. But where there’re ortiche, there are raspberries.”

At the edge of the woods Marino finds them — my favorite! He gives me a handful. What a sweetie!

Back on the trail, we look for CAI signs. The climb gets steeper and rockier above the tree-line with more bilberries and juniper growing on the exposed terrain. A cooling breeze sweeps down.

“Ah, fresh air,” Marino breathes in, “coming in from the sea.”

We look up at the cross on Rondinaio’s peak. It’s still far away but we’re already under the small saddle and pass that divides Monte Rondinaio and Monte Giovo, called Valico del Passetto (1,870-meters).

At Passetto, we get our first peek at Tuscany — the majestic Apuane Alps and the green Garfagnana valley in Lucca province. We pause with other trekkers. The breeze now whips around us. But wait! We’re still not at the top. A signpost marks four trails; two of them descend into Tuscany; another, on the GEA 00, is an exposed route up Monte Giovo. It looks almost vertical and arduous.

We skip the Monte Giovo trail and take GEA 00 (merged now with trail 523) in the opposite direction along Rondinaio’s barren, rocky crest, clambering over stones for 30 minutes towards the cross.

Near the top, Marino shouts “Rondini!” Two swifts dash and dart about, crossing flight paths and then soaring unhindered in a powerful, fervent dance. The mountain lives up to its name!

A fellow hiker shrugs. “There used to be so many more up here.”

From atop, the hiker lists the Apuane peaks to the southwest. He’s happy to share his knowledge and says his name is Gianni.

“What town is that?” Marino points towards the Garfagnana valley.

We gaze at verdant, pasture and timber-rich valleys.

A woman arrives from a Tuscan trail. “Look, the sea!”

“No,” Gianni says. “Those are clouds above the waves of mountain ranges.”

Gianni turns and points southeast into the distance. “On the other side of the valley, behind that house.”

The pass is on one of Hannibal’s purported invasion routes to Rome. It’s hard to believe elephants trod these paths. I picture them lumbering under nearby Monte Cimone, the highest mountain of the Apennines. The woodlands, open grasslands and sheer rock outcrops are unspoiled and perhaps much like Hannibal would have seen. Today, hikers dot the trails carved into the mountains. They rest by meandering streams and a string of tiny lakes in the valley below.

While we drink in the view, a lone hiker, sweating profusely from the Tuscan trail, stops to catch his breath.

“It’s harder than I remember!” he says. “And I used to have my woman’s bum to push up the mountain, too!”

“Talkative Tuscans!” Marino says to me.

We return the same way. Our destination is lunch beside Lago Santo. Picnickers, berry pickers and boys fishing trout surround Lago Baccio. No one is swimming. A man wearing a rock-climbing harness passes by. There are lots of trekkers coming up in the midday heat now — the cadence of Emilians, no foreign tongues.

“Last year I couldn’t see my nose for the fog on this trail,” a woman says. “This year is as it should be.”

“Talkative Emilians!” I say. Marino laughs. He’s one himself.

The park site has useful information and directions in English. For lodging, see Vittoria, Marchetti and Giovo, three guest houses on Lago Santo Modenese, the jade-green lake that sits at the foot of Mt. Giovo.