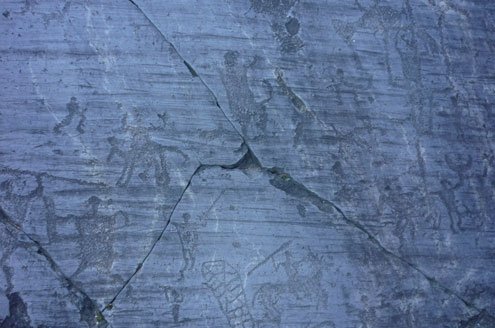 A prehistoric "story board" portraying daily life and moments of glory. Photo by Andrea Smith.
O

n a crisp September morning, my husband Marino and I head to Val Camonica, the eastern Lombardy valley that straddles the nearby provinces of Brescia and Bergamo and extends 90 kilometers north from Lago d’Iseo to the Tonale Pass in the central pre-Alps.

Val Canonica, a two-hour drive from Milan, contains one of Europe’s most remarkable outdoor prehistoric rock art sites. Its 300,000 stone engravings — known as petroglyphs — date from 8,000 BC to 100 AD and offer a window into northern Italy’s pre-Roman past and the more universal human journey from the nomadic hunting tribes of the Stone Age to the more organized Iron Age, in which daily life consisted of rites and warfare

Driving toward Venice on highway A4, we exit at the Bergamo Raccordo and drive up State Road SS42 just past the town of Pisogne and the glistening lake waters of Lago D’Iseo. The road into Val Camonica runs along the gold-sparkled Oglio River that flows down the valley into the lake and then onward to the Po River.

The valley itself is glacier-carved and wide, its northern and eastern mountains made from granite while those to the west from limestone. The hillside rock engravings — most of them located 200-to-400 meters up — were chiseled largely on dark, river sandstone known as verrucano lombardo. The valley’s Camonica name derives from its early rock artist inhabitants, called Camuni by the Romans.

We head first to National Park of Rock Engravings (Parco Nazionale delle Incisioni Rupestri di Naquane) near the valley town of Capo di Ponte. Created in 1955 to protect the engravings, the park became Italy’s first UNESCO heritage site in 1979. Signs at Capo di Ponte direct us further and we park at the hillside hamlet of Le Sante. A 20-minute walk on cobblestone leads us to the entrance.

With brochures in hand, we follow the signed wooded trail to rock number 50, then to 102. Their faces reveal a chaotic hodgepodge of deer, horses, dogs, and human figures, mostly dancing, fighting or hunting. A deer, painted 5,000 years ago, appears beside a 3,000-year-old portrait of dueling warriors. Elsewhere on the rock are engravings of houses, weapons, tools, as well as geometric symbols. They seem to me like Mirò landscapes in stone. There’s no color but all is uplifting, celebratory, commemorative.

We pass from rock to rock. Some are small; others huge, with canvases that tell of hunting and competitive games or depict scenes of war, navigation, agriculture, rituals and magic. Their order and their age seem random at first, but gradually patterns, customs, and an entire mentality emerge.

I imagine a shaman telling stories to initiates in front of the largest rock, pointing at drawings and symbols to illustrate themes. Ancient voices hang in the air. The art, an archaeologist friend told me, represents a “pre-historic storyboard — ideograms that lay foundations for writing.”

The earliest populations in Val Camonica were nomadic hunters called Rhetians, who inhabited the central-east Alps of Italy and Switzerland. Evidence suggests they were non-Indo-European groups of Etruscan origins. They engraved images of fish, deer, antelope and ibex around 8,000 BC. They settled the valley in the Neolithic period (4,000-3,000 BC), forming agricultural communities and beginning to “draw” human figures in daily life, adding religious symbols.

Between 3,000-2,000 BC, their techniques and tools changed and the images turned more dynamic and “narrative.” A male figure hammered into the stone reminds me of Alberto Giacometti’s “Walking Man” sculptures (Giacometti was born in the Swiss Rhetian town of Borgonovo). Ancient forms converge with more modern ones to offer a vision chiseled motion.

By the Iron Age (about 1,000 BC) the Camuni were trading with the Celts and Etruscans on the plains. Most of the rock art comes from that period, when the Camuni were forced to defend their territory. They idealized virility and heroism, hence the portrayals of battles, duels, weapons, muscles and genitals. But they also acknowledged the fixtures of daily life, huts, wagons, harvests, labyrinths and footprints. In addition to designs, there are words in Etruscan (500 BC) and Celtic (300 BC) that remain indecipherable.

At the edge of the park, we come to a picnic table under trees and relax. The wooden table is covered with graffiti, which I normally abhor — but not this time. The graffiti is a dynamic rendition of rock art figures. The table carvers are conversing with the past, and also with the present, with us. Time flattens. We participate in the rites.

We next explore an unmarked path that ends in a meadow and vineyard. The Camuni were already renowned winemakers by the time the Romans conquered Val Camonica in 16 BC, after which the engravings waned and the local population was slowly assimilated and “Latinized.”

We climb other trails, but the higher-up paths are closed. We turn back, seeking out one more image. I crouch under a beech tree on a hillock near rock no. 57. With the sun higher, the light blurs the rock face. But I can see the outline of plough.

I imagine the artist squatting in the same place, perhaps under another tree, the earth and grass not quite the same as 2,500 years ago. I think to myself that if dug deeply enough, I could reach that ground, and give him voice again