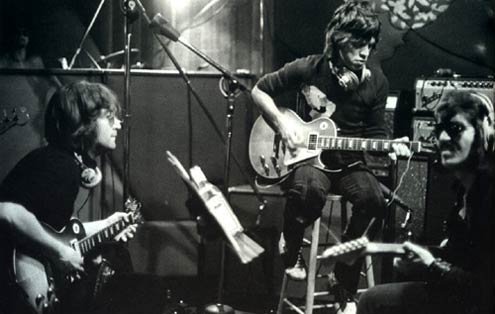 hree and a half years have passed since I began this column. As I reflect on the 40-odd pieces I’ve written thus far, I find I’ve written about most of my major interests: food, our daughter, language, books, our daughter, science, travel and — yes — our daughter. But something’s missing, something that was once hugely important to me and ate up years of my life: music.

And I think there’s a reason for this: I hate Italian music. Really. Now hear me out.

I don’t mean I hate all Italian music. That would be silly. Though I’ve never really been into classical music or opera, I accept the Italian genius in those genres. I trust that connoisseurs are right in praising the contributions of the Boot, just as they have in painting, architecture and political corruption.

What I hate is Italian pop music. I used to hate American pop music, too, but living in Italy has trained my ear to distinguish between the saccharine tones of Claudio Baglioni and those of, say, Mariah Carey — and to prefer the latter by an admittedly small margin.

When I’m in the car — and I am a lot these days — and tired of hearing Miles Davis or The Byrds’ “Sweetheart of the Rodeo,” and feeling particularly masochistic I’ll switch on the radio. If I’m lucky I’ll hear some American hit song from 40 years ago, or some British hit from today, or tune into a call-in show on Radio Maria. The other 90 percent of the time my ears curl at the sound of Laura Pausini’s latest piece of whimsy, indistinguishable from her last one. Or maybe it’s Renato Zero crooning on about the “best years of our lives,” or — even worse — Italian “hard rock,” which rarely starts rocking.

A friend of mine put it best when he told me Italian rock music never manages to sound decadent. There are no drugs and even less sex, which are vital even to faux-decadence. You can picture Vasco Rossi — who sings “Vita Spericolata” (Dangerous Life) — at Sunday lunch eating a mountainous plate of tortellini, then nursing a Strega as he dozes off in front of “Domenica In” with the in-laws.

Contrast that image with the powdery wastelands of cocaine and methamphetamine, the seas of whiskey and rivers of beer that chug-a-lug through the best American and British rock music. Now try to picture the Lou Reed of “Transformer” at his parents’ home on Long Island nursing a bowl of matzoh ball soup at shabbos dinner, a yarmulke teetering just-so on his neon yellow crew cut. (You can’t.) Italian rock stars don’t die of drug overdoses or get shot by their fans onstage; they die of natural causes. How dull.

There is one Italian singer I really like, however: Lucio Battisti (natural death). I once went so far as to call him “the Italian Bob Dylan,” which was probably due to his white-boy Afro more than his music. I do genuinely like Battisti, though he was probably the Italian Donovan instead.

My wife, who never spent five years of her life collecting vinyl records, adores Vinicio Capossela. At times she taunts me by calling him “the Italian Bob Dylan.” Capossela is an eccentric singer-songwriter who has recorded some truly brilliant genre-crossing music. For years, though, every time I heard him I had a nagging feeling of the familiar. When I played Tom Waits’ “Rain Dogs” for my wife, she too admitted it sounded just like Capossela.

But apart from a handful — or a spoonful — of exceptions, the Italian music scene is a let down. Italy has never produced a powerhouse like the Rolling Stones, a creative genius like Bob Dylan, or even a monotonously innovative outfit like Kraftwerk (proving that I’m not biased against non-Anglo-American music culture.) In the end Italian rock just isn’t very exciting stuff.

I suppose the Italian language just doesn’t lend itself to rock (as, for instance, English doesn’t lend itself to Haiku.) How would you go about rendering “Jumpin’ Jack Flash, it’s a gas gas gas…” in the language of Lorenzo Da Ponte, anyway? (One might listen to this Italian rendering of “Paint it Black” for a clue.) It can’t be easy to replace all those monosyllabic words with polysyllabic ones and get the same effect. It’s not exactly sonnetry, but you get the picture.

Hip-hop is far more elastic than standard pop music, and it therefore stands to reason that Italy has produced a hip-hop artist of some worth. After all, they’ve had 30 years to work on it. But the results have been dismal. The best Italian hip-hop song I know is actually a rock song from 1978, when American hip-hop was still in diapers: “Nuntereggae più,” by Rino Gaetano (death by car accident). The content is somewhat sophomoric — fine hip-hop is decidedly freshman in outlook —but a decent rhythm section and Gaetano’s clownish persona compensate.

I could go on, but it’s not worth it. Next month I’ll get back to extolling the virtues of local wine and truffles, which is what’s expected from American expats. They would never survive writing about pop music.