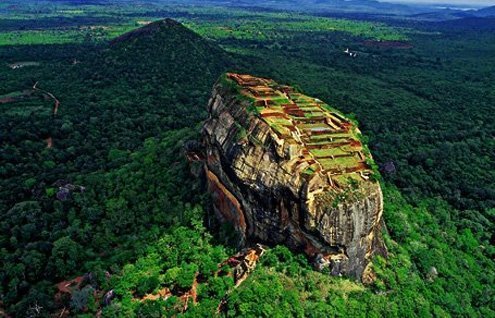 Kashyapa I of Anuradhapura built the city and citadel at Sigiriya, Sri Lanka.
I

’ve always seen happiness as the sum of moments that make you feel that life’s worth living.

They can come in the form of small revelations, like seeing a newly planted olive tree, a gift from a friend, take root and flourish after two years of barren harvests. Or what you feel when your daughter tells you she wants to write a book based on one of her dreams. Or just watching your husband toiling away outside, frocked in five layers clothes to keep the cold wind at bay as he ebusies himself painting wooden shutters. He’s as fit as he was 25 years ago when I first met him.

It can also happen when something you thought was impossible comes true. On New Year’s Day I climbed Lion Rock at Sigiriya, a major archeological site in central Sri Lanka. The rock itself is massive volcanic slab towering 200 meters above an emerald expanse of jungle dotted by a river and lakes. Atop it are the ruins of a palace built by wicked King Kashyapa some 1,500 years ago. Kashyapa, who took the throne from his father and then buried him alive, used the citadel to keep various fifth century enemies (and he had many) beneath him. To get to the top you must climb up an elaborate network of stone and metal stairs.

You might find all this fascinating but wonder why on earth it matters to me.

I’ll explain. For more than a year I endured my own set of tortures. An ankle inflammation stopped me in my tracks. I couldn’t climb the stairs at home let alone take short walks outside. My hours as a cooking instructor became an agony. I visited doctors and tried all sort of remedies to no avail.

I booked the Sri Lanka holiday resigned to the fact that I’d probably be stuck in gardens and have to content myself with admiring Lion Rock from below. After all, it takes more than an hour and 1,200 precarious steps to reach Kashyapa’s ancient hideout.

Then, about one month before our departure, my pains began receding. I don’t know why. The only change in my routine was drinking copious amounts of fresh ginger tea. By the time we got to Sigiriya I was almost pain free. I reached the top in a burst, leaving a line huffing and puffing people behind me. A far younger fellow adventurer even complimented me on my pace.

Once at the summit, I cried. I’d improbably made it to an impossibly beautiful place. I was with those I love at the top of the world on New Year’s Day.

I’m not sure I believe in miracles, but I do know how to make ginger tea. But the tea doesn’t work alone, alas. You have to serve it with large doses of perseverance (sorry, I don’t have the recipe). You need to believe, no matter what, that at some point the tide will turn.