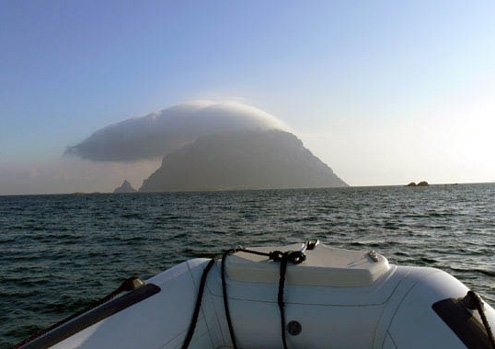 outh of Sardinia’s Disney World, the Costa Smeralda, and Italy’s busiest port, Olbia, 20 islands huddle between Capo Ceraso and Cala Finocchio to form a protected marine reserve. Some are long and squat, like Isola Molara, others barely poke their heads above water. Only one makes a deep impression. Isola Tavolara is a 565-meter limestone stack that looms like craggy beacon beyond the Gulf of Olbia. Even in summer, a deep, dramatic cloud hovers above the island like a crown, helping to nurture the island’s microclimate. But Tavolara is more than a rocky speck on the Italian map: It’s also the world’s smallest kingdom.

The saga began when Giuseppe Bertoleoni became the uninhabited island’s first settler in 1807. Like many 19th-century immigrants, Bertoleoni sought a life free from the persecutions and prejudices of old-world Europe. Bertoleoni had been charged with bigamy in his native Genoa and fled toward the islands seeking safe haven from religious prejudice.

Bertoleoni and his small harem soon realized that they were sharing their five-square kilometers of real estate with a rare species of goats whose teeth were dyed a golden yellow color by the seaweed and lichen they ate.

Word of the gilt-toothed goats spread to Carlo Alberto, king of Savoy and Sardinia, who eagerly traveled to Tavolara to hunt the animals in 1836. (As any visitor to Turin’s Palazzo Reale can attest, the Savoy kings were avid hunters and marksmen). Giuseppe’s son, Paolo, hosted Carlo Alberto and guided the hunting excursions. The king was so impressed with the state of affairs that he immediately declared Paolo “King of Tavolara.” After Carlo Alberto’s minions confirmed that tiny Tavolara had in fact never officially been part of the Kingdom of Sardinia, Paolo received a scroll confirming his monarch’s status.

Tavolara briefly became a republic after Paolo’s death in 1886, but the monarchy was reinstated in 1899 and recognized by Italian monarch Victor Emanuel III, who in 1903 went so far as to a sign peace treaty with the postage-stamp island. While collecting photographs of world leaders, England’s Queen Victoria stopped by and snapped a shot of nine of Tavolara’s 33 residents (the “royal family”). The gold-framed photo is still displayed in Buckingham Palace above the caption “World’s Smallest Kingdom.”

Though Tavolara was never formally annexed into modern Italy, the installation of a NATO base on the island in 1962 effectively ended its sovereignty and made roughly a quarter of the kingdom off-limits to the island’s handful of residents.

Among them is Tonino, a 74-year-old part-time fisherman and the reigning King of Tavolara, who may or may not have shaved depending on when you happen on his island palace. When he’s not fishing or ferrying tourists between the port at San Paolo and Tavolara, the sixth king in the Bertoleoni lineage lords over Tavolara’s 15 residents, a few nimble goats, cormorants, and a species of prickly knapweed flower found nowhere else on Earth.

Visitors to the kingdom arrive at Tavolara’s only flat stretch, a sandy tongue of beach called Spalmatore di Terra. Generators power the sprinkling of houses still owned by the Bertoleoni family. The island’s two restaurants, “Da Tonino,” and “La Corona,” are run by the king and his queen sister, Maddalena, respectively. There’s also a modest cemetery where members of the island’s previous royal families are buried. The kings have a crown placed atop their graves — something none of them ever wore while alive — and each tombstone is adorned with the Tavolaras’ coat of arms: a walrus camped atop a rock.

Unlike many small hamlets in Sardinia, Tavolara’s population remains stable. Tonino and Maddalena each have many children, including a prince and princess in waiting. This is in stark contrast with the rest of Sardinia, where many rural communities are dwindling or evolving into virtual retirement homes.

Sardinia’s zero-growth situation has become serious enough that many local governments have begun paying out baby bonuses of thousands of euros per child to help salvage their communities. But these inducements haven’t slowed down the Sardinian exodus. Lured by images of exotic, far off places or the promise of a new, more exciting way of life, tens of thousands continue to quit the island.

Just how many kingdoms they’ll be founding is an open question.