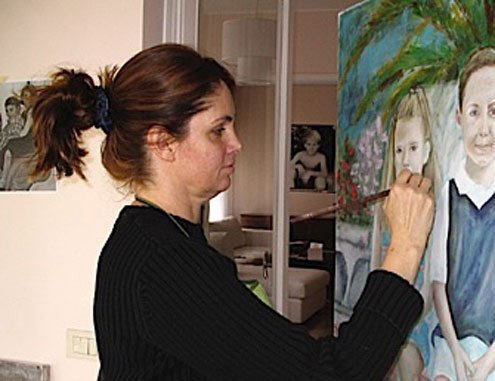 Rochelle Cheever and her brothers were the peculiar American kids on the Roman block. They drank carrot juice, ate whole-wheat pasta, and every evening — rain or shine — ran two miles around a tennis court.

Though hardly typical of Rome family life, particularly three decades ago, it was all part of the Cheever family plan that began with her father, Edward, who brought fitness clubs to Italy for the first time. The discipline trickled down to her high-octane brothers, Eddie Cheever Jr., who captured the Indianapolis 500 in 1998 and owns Indianapolis-based Cheever Racing, and Ross, who is also a race driver.

Rochelle, a portrait artist, is the last of her family to live in Rome, and unlike the rest of them, she spends her day focused on the art of the body rather than making the body move.

“I guess I’m a bit of the black sheep of the family,” she says, gazing at her work.

The walls of her apartment are covered with her portraits, including one of herself looking over her shoulder, as if greeting guests who enter her space. The paintings are everywhere. In the foyer, down the corridor and hanging in the bright living room, pre-teens lean against earth-toned backgrounds; parents and children lounge together on a couch, and youths stuff their hands in their pockets in life-like representations.

She examines a large portrait of her son Chris. He sports an earring, jacket open and bead necklace peeking out of his T-shirt. “There’s my son at 17. He’s now 21, he keeps telling me I need to update it,” she says sweetly. “Look at the arrogance. He’s 17 going on 40… One day children are gone. When you paint a portrait, you stop life, you capture it for a moment.”

But Rochelle Cheever’s favorite painting is a family portrait that her mother had done. She wants others to feel as moved as she does when she sees her family in paint. “When I give people their portraits, I get tears. That makes me happy.”

“Rochelle’s art is a reflection of her love for her family and her children,” says Antonella Interlenghi, an Italian actress and a childhood friend. “She needs to bring this out in her art.”

Her uncle, Ray Wilson, and Edward Cheever helped found the modern-day health club industry. Her uncle bought the rights to the Lifecycle exercise bike and opened gyms throughout the Unites States in the 1950s and 60s. Rochelle’s mother was working in one of Ray Wilson’s establishments when she met Cheever, a five-time Mr. Arizona.

Together they lived the classic rags-to-riches story. With only $3,000 in hand, the Cheevers moved to Australia where Edward opened successful health clubs. In 1960, they returned to the United States for Rochelle’s birth. A year later, Edward Cheever moved the family again, this time to Italy, hoping to press ahead with his health and fitness concepts. “He had such nerve, he wasn’t afraid of anything,” boasts Rochelle.

The Cheevers arrived at the height of La Dolce Vita. The Via Veneto buzzed with stars. Some sought American-style workouts, which Edward Cheever could provide. Clint Eastwood and Sylvester Stallone were her father’s clients and friends. She and Eileen Getty, daughter of billionaire John Paul Getty II, played with Barbie dolls together. Jane Fonda sought the gym for a private workout (Cheever refused). Author Gore Vidal dropped by to pump iron. One Cheever gym, Roman Sport, is still open.

“The Cheevers weren’t about [celebrity],” recalls Interlenghi. “They were about being Americans in Rome. They were a big sprawling family — unconventional, but very strict.”

The family lived in a three-story villa in an isolated area of Rome. Though Rochelle and her brothers tried leading normal lives, the kitchen became a health lab. “The cook had orders to feed us vegetarian food,” she recalls. Her father handed out vitamins to each child and made Rochelle a morning drink of yeast flakes chocked with vitamin B. “It was disgusting. I felt sick every morning on the bus.”

Some kids thought they were crazy. Italian families watched dumbstruck as the Cheevers tried to order vegetarian, refined sugar-free meals at local trattorie. Rochelle’s first date took her to a fish restaurant — an experience she recalls as a minor disaster. “We were the Americani di Roma — we lived in Rome, but we were Americans.”

She’d sneak an occasional cigarette or some junk food, but in general the Cheever household resembled the year 2000 circa 1960. “It was way before its time,” she admits.

Much of the health “training” was based on the family’s desire to help the boys succeed. Young Eddie Cheever Jr. loved racing. “We were into this health thing for [Eddie] to be the champion. The focus was on the boys.” But all the kids got go-karts, which Eddie and Ross used to build their racing careers. Eddie would race 132 times in Formula One before taking his automotive talents to the United States.

Rochelle often slipped away to play the piano or paint. In college, she majored in nutrition, until one instructor sensed an underlying talent. “My teacher said, ‘you have naturally what other people don’t have,’” and with that she turned to art.

Though she imitated the work of French Impressionists and studied Michelangelo’s and Leonardo’s lines, she couldn’t deny her preference. “I loved to draw people; faces. I liked being one-on-on, it’s very intimate.” But when she graduated from the Corcoran School of Art in Washington, D.C. portraits were unfashionable. “It was kitsch,” she says. Now, portrait work is booming. Rochelle thinks the shock of the September 11 terrorist attacks helped restore home and family values. “Families have gone back to the basics.”

Her portraits are generally commissioned by families in Italy and in the United States. Averaging two major portraits a year, she’s painted the Fendi family and the grandchildren of outgoing U.S. Ambassador Mel Sembler. Her red chalk, Contè (a square pastel crayon) and graphite portraits, as well as her creative photography, are also popular. Depending upon the subject’s age and portrait sizes, her oil on linens run from roughly €1,200 to €7,500. The red chalk, Contè, and graphite portraits go for between €750 and €3,500.

Whether in the United States or in Italy, Rochelle usually goes to a family’s home, relaxes a subject in a comfortable place, and takes hundreds of pictures. “I go to their own environment, I get to know them,” she says. “If you tell a child to pose, you’ll lose them. I can read into the child and I can look for the most dynamic features. Their eyes are very important, their body language.”

She and the parents choose which photo to use and Cheever begins her sketch on her linen canvas. The ghostly faces in the beginning will deepen, she says, by using a glaze. Instead of mixing her colors, she applies layers of paint to reach the desired tone and hue, giving it a glass effect. She takes pictures of the various stages and emails them to the parents.

They may tell her that a child’s eyes aren’t quite the blue she’s selected, or that the background should be different. She complies, but all her figures retain a realistic look. No brush strokes catch the eye and she applies an antique finish. “I have a contemporary style; it looks like the person is here and now.”

Although she married young and has three sons — the oldest 24 and the youngest seven — she works constantly. She’s shown her oil paintings in the U.S. and Italy, including Rome’s American Academy in 2002.

Rome continues to inspire her, and the combination of Cheever’s “American head and Italian heart” won’t allow her to leave. She’s happy with her early nights to bed and early rising. The rhythm suits her. “My life is about my art and my children — I think that’s enough.”