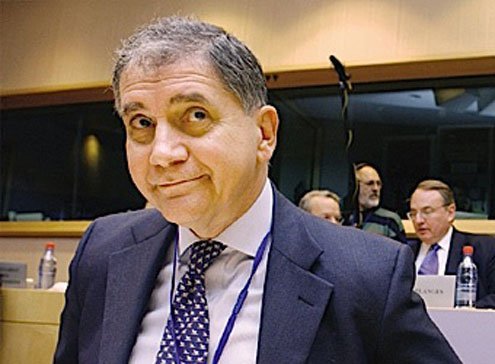 In the fall of 2004, Rocco Buttiglione, a friend of the late Pope John Paul II’s and Italy’s European affairs minister under the government of Prime Minister Silvio Berlusconi, was forced to withdraw his nomination as the new European commissioner for justice. His conservative social views proved an anathema to a predominately secular European Parliament. After his nomination, Buttiglione, who heads Italy’s Christian Democratic Union (CDU), said homosexuality was a sin and assailed the moral fitness of single mothers.

The comments, though in keeping with Buttiglione’s social and political thinking, provoked outrage among Socialist and Green deputies within the EU. When Berlusconi reluctantly his name from consideration, Buttiglione called himself an “innocent victim of an orchestrated campaign,” a position he maintains today.

Buttiglione has a boyish face that sits incongruously on a somewhat gangly, six-foot frame. His disarming manner is in keeping with 18th-century erudition and charm; he makes a point of practicing the antiquated courtesy of kissing a woman’s hand. That Buttiglione’s proper demeanor would unsettle European Parliament liberals is hardly surprising. The cigar-puffing traditionalist harks back to an age at odds with progressive liberalism. But he is anything but apologetic.

Buttiglione, who is also a lecturer in philosophy, spoke to Edward Pentin in Rome.

How disappointed were you about the European debacle? Did you consider it to be a personal defeat?

I very much wanted to become a European commissioner and of course I was disappointed. On the other hand there are things more valuable than a seat on the commission and one’s conscience is one of them — perhaps first and foremost. I must add that when I resigned I felt I was completely alone, abandoned and defeated. But immediately after that I realized there was an enormous current of support for me personally, and for my positions. [There are many] people who can make a distinction between ethics and politics and who think that you do not have a right to set up a kind of inquisition, or “conscience police” in order to enquire into the religious convictions of anybody, and in particular of a possible commissioner.

Do you think the affair had more to do with Europe’s institutions rather than European society as such?

It had to do with some European lobbyists and it was a disgrace — a disgrace from the point of view of a balanced Europe. … You cannot discriminate on conscience — and this was done. According to these principles, Konrad Adenauer, Alcide de Gasperi, Robert Schuman would not have sat on the commission. By the way, according to those principles, George W. Bush could not sit on the commission — not even John Kerry, because although he is a liberal he thinks that abortion is morally evil though it should not be punished by the law. And this, by the way, is exactly the position I held in the commission. So there is a kind of new orthodoxy and those who hold to this orthodoxy believe there is only one truth, and this truth is that there’s no truth. Anybody who stands by objective values, anybody who thinks that there is any kind of truth, although he keeps them carefully distinguished (the sphere of religious truth from the sphere of politics), he is at least considered suspect. He’s a second class citizen.

One European member of parliament has been quoted as saying the “incident” was staged.

Of course, it was staged.

But do you think, as many commentators believe, that the affair had more to do with your association with Silvio Berlusconi government than with the views you espoused?

Things must be taken at face value. I was attacked because I said that I may think that homosexuality is a sin, although I don’t think the concept of sin is often used in politics because in politics we talk about nondiscrimination and I am emphatically in favor of nondiscrimination. I don’t think homosexuals should be discriminated against. I don’t think those who think homosexuality is a sin should be discriminated against either, because a liberal state is one in which people holding opposite moral views can be citizens with equal rights within the same state because they recognize each other as having the right of being wrong. I think that you are wrong, but I am ready to give my life in order to preserve the freedom of being wrong. Now it seems that if you do not agree with the official standards of the European parliament, of a very tiny majority in the European parliament, then you are a second-class citizen.

So would you agree with Berlusconi’s comment on the affair, that you were a victim of a kind of “secular fundamentalism”?

There is a kind of fundamentalism — it is a nihilistic fundamentalism against truth… Take Greek democracy, it didn’t fall apart because of the strong moral convictions of some politicians. It fell apart because of the moral corruption that is the result of moral relativism. Look at fascism, look at national socialism. Isn’t it true that the moral decay of the continent of democracy has opened the road to these forms of dictatorship? Isn’t it true that fascism was a form of moral relativism?

It is not my thesis, it is what Benito Mussolini said. He said that fascism derives from the most modern trends of modern philosophy and is relativistic, because if there is no objective truth, then I have the right to use all my strength to impose on others what suits me. So, it seems that that philosophy stands at the balance of the position of that majority in the European Parliament, and that’s why I say it’s a kind of covert — not overt — totalitarianism.

Do you think this form of totalitarianism will get worse?

No, I don’t think it’s going to get worse… I’ve heard many liberal democrats who are now conscious of the fact that what they have done is not at all liberal, even less democratic. Also many socialists seem to be realizing where they have gone too far. But in any case it is clear that today liberty is in danger in Europe and the danger comes from the left.

So the events of last fall were really a blessing in disguise? Well I’m the last who would say that! But it might be.

How much time do you give Berlusconi politically?

I am sure we’ll reach the end of this legislature and I am confident we can win the next election. Since [former Prime Minister Romano] Prodi came back, all opinion polls show that we are becoming stronger every day. It is possible that the Buttiglione affair also contributed to this strengthening of the coalition.

Do you think Berlusconi is more of a liability than an asset to the country in the eyes of the rest of the world?

How are new immigration trends in Europe affecting Italy?

Quite a lot. First, the real problem is not immigration. The real problem is that we’re not having children. If Islam were to prevail and if Islam occupied Europe, it would not be its fault, it would be our fault. If we have no children, what is wrong in occupying a continent that has become void, empty? And this is what could happen over the next 100 years if there is not a change in our general culture.

You mean a kind of demographic suicide?

Yes, there is a demographic suicide and its cause is this hedonistic culture which has led the attack against me. So the real enemies of Europe are not in Islam, they are among ourselves. Second, the model of multiculturalism has entered into a deep crisis. We should not talk anymore only of multiculturalism, we should go back to the old idea of natural law. There are some rules that belong to human nature. Nobody can come to us and say, “In the name of my particular culture I have the right to violate those natural rules.”

Shall we accept human sacrifices if a Gnostic community comes to us and says, well this is a significant part of our culture? We have a right to do that in Europe. I think we should say no, and I should add that Europe has a culture which is Christian and those who come to us should respect this culture.

This takes us back to dialogue, doesn’t it?

Yes. I think that it is easier for Islamists to have a dialogue with Christians than with nihilists. What they are afraid of is not so much Christianity but the idea of a Western culture that destroys all values and reduces humanity only to the level of those vital values, usually sex and power, that do not need to have any moral justification.

Do you think conservatism in Europe and Europe’s institutions might be becoming a thing of the past?

It depends on what you mean by conservatism… I rather think the issue is: Shall we preserve the fundamental values that allow us to live, or shall we lose them? If we lose those values, the result will not be a society without values, the result will be the death of Europe. Europe will disappear. The nihilistic left leads us towards the suicide of Europe, so it is not a matter of a struggle for conservative values, it is a struggle for Europe.

Look at the United States. In the 1970s or the beginning of the 80s, a lot of what is said about Europe could have been said of the United States, and was said. I still remember books on the end of the “American age,” the decay of the American empire, and everyone was convinced that the future belonged to Japan and Europe. They said Europe, but really they meant Germany. Today nobody would say that, and what is the reason? I think there’s a simple moral reason — the values that were prevailing in the U.S. in the 1970s and 1980s are now prevailing in Europe, and in the U.S. there has been a reaction that has led to a coming back to some fundamental natural values, I should not say Christian values — they are also Christian — but above all they are natural values.

So you’re saying that America has gone through what Europe is experiencing and come out the other side?

There’s been a reaction — a very positive reaction, but when I say this, please do not identify me with uncritical support of Mr. Bush because the reaction goes through the presidency of Ronald Reagan, George W. Bush’s father, and William Jefferson Clinton — who is a Christian. You might say he’s a sinner, yes — we’re all sinners — but he’s a Christian, and he won the elections on a platform in which family values were central. Then you have George W. Bush. All those presidents have incorporated into their program family values and a substantial coming back to Christian values.

Well, so be it, but we’re all sinners. George W. Bush is a born-again Christian. Which makes me think, I wonder whether Bill Clinton could have overcome the opposition of my position in the European Parliament? It is very interesting what Clinton said about Kerry’s defeat. He said we Democrats will never again win an election in the United States until we find somebody who is not afraid of speaking out in the name of God and saying clearly that we’re against gay marriage. Kerry was against gay marriage but did not say this with enough conviction and not often enough: This is not Buttiglione speaking but a quotation from William Jefferson Clinton.

About the Author: Edward Pentin

Edward Pentin, a Canterbury, England native, assisted with Newsweek's coverage of the papal election and is Rome correspondent for the National Catholic Register. Since graduating in international relations at the University of Keele in England, he has taught in Tanzania and spent two years working in an international school in Switzerland. He has a Masters in justice, peace and mission studies.