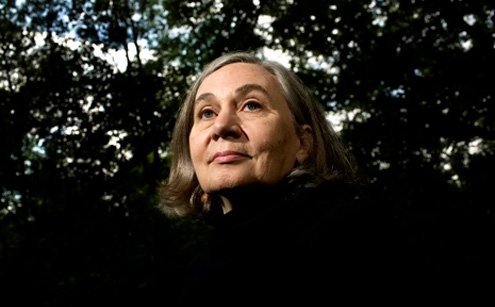 #8220;Lila” (Virago Press: London, 2014) completes Marilynne Robinson’s splendid trilogy centered on the fictional small town of Gilead, Iowa in the early 20th century. The novels portray the families of two pastors and their preoccupation with theological mystery. Yet their historical sweep is extensive enough to abut landmark events — the Civil War, the Great Depression and the civil rights movement.

Effectively mixing nearly mystical ingredients with realism is a tall order. But Robinson makes it seem easy — no doubt because she believes in the faith she presents, a “soft” interpretation of pilgrim-era Calvinism supplemented by Ralph Waldo Emerson’s transcendentalism. The result is a voice and vision that is vibrant and totally American.

All three “Gilead” books take up suffering, abandonment, forgiveness, grace, predestination, and the possibility of redemption. A look at the first two novels underlines the remarkable scope of the third.

“Gilead” (2004) and “Home” (2008) sketch out the life and times of Congregationalist Minister John Ames and Presbyterian Minister Robert Boughton, lifelong friends now nearing death. “Lila” instead centers on the elderly Ames’ young second wife, a peripheral figure in the preceding works. Though “Lila” has no first-person narrator — “she,” not “I,” tells the story — all events are clearly seen through her perspective.

“Gilead” was Ames’ book, a first person epistolary legacy to Robby, his son with Lila, to be read when the boy came of age. Family history and ethical principles were the dying Ames’ chief concerns. All too many pages dwelled on Calvinist questions of salvation and the theological divide between him and Boughton. “Lila” will extend their doctrinal chats to profound, private inspiration.

“Home,” set in 1956, produced an omniscient narrator often filtered through Boughton’s practical daughter Glory. Betrayed by a long-term lover, Glory’s only choice was to return home to Gilead and keep house for her aged father. Prodigal son Jack, away for two decades, also returns and is received forgivingly. But Jack secretly has a black companion and colored son. The segregation of the 1950s has forced him to abandon his mixed-race family. Now he looks to Gilead as their future refuge.

Unable to talk to the terminally ill Boughton, Jack confides in Ames. During Civil War years, Ames’ fiercely abolitionist pastor grandfather moved his family to Gilead, an anti-segregation town. But in 1956, it’s a very different, and racist community. There’s no hope for Jack here. Boughton and Ames have taught their parishes doctrine, but not the moral core of social relations. Only Glory and Lila sense the depths of conscience-stricken Jack’s despair. Suffering is something both these women know.

“Lila” backtracks to reveal Lila’s progress to Gilead. Until she married widower Ames, transience and abandonment were all she knew. Her recollections begin at age four, when a woman named Doll finds her wailing under a transients’ shack. She’s been cast out of her home and is starving.

Doll steals away with this rickety, nameless child who is speechless save for the curse words often yelled at her. She gives her a pretty name, Lila (Lila will later create her surname — Dahl — from the sound of Doll). Together, the migrant workers take to the road, sharing whatever food or employment comes along. They live in the wind and rain, without calendar or clock. They watch the sun come up and seasons change. This raw immersion into the natural world — a “great, sweet nowhere” — confers a kind of rudimentary happiness.

Midwestern farms then descend into the Dust Bowl of the Depression Years. There’s no work, no food, and Doll is suddenly in jail for murder. Lila’s a lonely vagabond again.

Until one year, one day, she finds an abandoned cottage along a road outside Gilead. It offers her shelter and Lila is soon able to find occasional work in town. On a Sunday, she enters Ames’ church to escape the rain and finds him reading from the Bible. Here God’s presence literally appears within a cloud from the North. This is something Lila can understand.

After the theological abstractions debated often in “Gilead” and “Home,” Lila’s story is rich in introspective detail. She bears close resemblances to the transient Ruthie in Robinson’s novel “Housekeeping,” written before the Gilead trilogy. Both young women are fictional representations of an Emersonian ideal: “an eye absorbent rather than reflective … takes in all Nature has to offer.”

While Ruthie’s story was about experience alone, Lila links experience to theology, and finds spiritual consolation. “I just been wondering lately why things happen the way they do,” she tells Ames. Once married to him, she studies the Bible, and its dramatic promise of a state of grace that can transform daily life into mystical elation. For a time, Robinson lifts the reader, into that exalted, visionary world.

My guess is that “Lila” will soon come to be seen as among best novels of the decade.