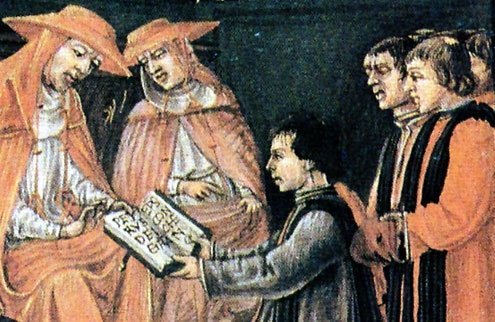 He faced a row of toga-clad interrogators...
S

aturday, my son graduated from university: Roberto, my first-born, my pride and joy; Roberto whose birth irrevocably changed my life; Roberto who increased my capacity to love and brought me sweetness I couldn’t have imagined.

This isn’t his first degree. He earned a laurea two years ago but this is the most important degree because it’s the last. He’s already been working a year and has had to finish his coursework and write his dissertation on weekends and evenings.

Saturday he defended his thesis — something about “channel marketing” that was beyond my comprehension. I remembered us reading together, books about insects, reptiles, space ships and, with his sister, many, many story books. He was sitting at a table now, on a stage, in a small theater. He faced a row of toga-clad interrogators and, beyond them, his family, friends and some curious onlookers. We sat in plush seats, in steeply inclined rows, each row behind a long, curved table.

I’d been warned that not all the academic interrogators — the experts — would pay attention, but I didn’t expect them to talk with each other, pass mints and joke while my darling was speaking. I wanted to get out my school teacher voice and announce that whoever didn’t sit quietly would miss break.

Roberto wore his dark suit, purchased for the preceding graduation ceremony and subsequently pulled out of the closet for job interviews and a wedding. Roberto is handsome, always has been. Already in the maternity ward, my husband and I would stare for hours at our new baby lying in the culla, rosy and perfect, so beautiful that, coming from the two of us, it had to be a miracle.

Roberto talked about his research. He talked confidently, naturally, with elegant sentence structure, without using cioè or nel senso che, without hesitating. The panel of experts quieted down and listened. Roberto talked for 20 minutes. I realized I haven’t heard him talk this much in one shot, since he was a little boy, telling me about dinosaurs.

Back then, he spoke to me English. Now he was speaking Italian, in a voice I hardly recognized. It had a different timbre, different inflection. He gestured differently, his face had a different expression. My children have always said that being bilingual is really being two distinct people. This Italian Roberto, talkative, authoritative, with a higher, sharper voice, was someone I barely knew, someone who reminded me of my husband. Like the baby in the culla, I could hardly believe he came from me.

Afterwards, he was welcomed outside the theater by a crowd of friends, only one of whom I recognized: Marco, his childhood amico del cuore. Roberto introduced his friends. They seemed bright, well-mannered, fun. They hugged him and clapped him on the back. The girls kissed him. They seemed to know him very well. Roberto laughed, shouted, joked.

But he has always been very shy. Especially in junior high and high school, his teachers would say he rarely spoke in class. He used to speak to me, though. He played basketball with me once in a while. He told me his troubles. Now he’s quiet at home, spends hours alone in his room, is often silent at dinner — not morosely, just absent. I understand, that he’s thinking about his other life, his real life, the life I’m not part of, any more than my mother is part of my life.

Who are all these people? If I ask him some evening who he’s going out with, he says, “Gente,” not unkindly. He may give me a baccetto on the cheek. He’ll smile and say, “Sorry, Mom, that’s all the info you’re going to get.” Sometimes he might douse himself in after-shave and ask my opinion about a jacket or sweater. He may even say he’s going for dinner and to a film. Then I know that, this time, gente is a girl, but which one? Is this the girl he talks to late at night on his cell phone?

With Roberto’s friends, we walked across the street to a sidewalk cafè. He sat next to his nonna and put his graduation toga over her shoulders to protect her from the wind. He showed me the final page of his thesis, with a dedication to his parents. He passed it round the table, showing friends where their own names were listed in the acknowledgements. They were surprised. They all laughed. Roberto joked that he could never have completed this great work without their support.

Then they lifted their glasses to toast Roberto, this gregarious, confident, Italian man who has blossomed and who has moved out of my world and into his own.