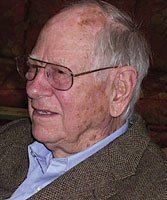 Dahl has little good to say about exporting democracy.

Robert Dahl is baffled. Democracy isn’t something you try on like a new suit, says the 89-year-old Sterling Professor Emeritus of political scientist at Yale. Dahl, who has written extensively on American democracy, taught at Yale when President George W. Bush and Sen. John F. Kerry were students there, and recalls reading the senior essay of 2000 vice presidential candidate Sen. Joseph Lieberman. Born in 1915 in rural Iowa, Dahl’s family moved to Alaska, not yet a state, in 1925. He paid $30 a course to attend the University of Washington and did graduate work at Yale. He interned in Washington, D.C at a time when the New Deal, not the War on Terror, was the political buzz. He fought in World War II before turning to teaching. He lectured in Rome recently, where Jessica Ricci chatted with him.

Is anti-Americanism a media invention or substantive?

I don’t think there has been a time in American history in which our international credibility and standing — our moral standing — has been as low as it has been. That is extremely difficult to recover [from]. While some very hardheaed people might argue that moral standing isn’t important, it is a huge asset. If people don’t trust you, don’t believe in your policies, they begin to feel that you can’t be trusted to carry out reasonable policies. That’s a huge loss in the international force. That appears to have happened quite seriously, especially with the Europeans, but not only with the Europeans.

The current administration talks about exporting democracy to Iraq. How do we know that Iraq can sustain democracy?

Paul Wolfowitz … was a younger member of my [Yale political science] department. [He’s] an intelligent man, I think he’s a thoughtful man, and [I don’t know] how he could believe that Iraq could be converted to a democratic order quickly and that we would be met by them. [People] appear really to believe that a transition would be simple, straightforward…. The understanding is so shallow…

I think that we have increased enormously the threat and likelihood of terrorism by our actions. Going into Iraq to stamp out terrorism? We’ve generated it. I can’t see an endpoint to it.

The separation between church and state seems to be narrowing in the United States. Do you see this trend?

We have to distinguish two things: one is whether the number of fundamentalist Christians is increasing, or if their influence is increasing. It’s the second. There’s not much evidence that they are increasing in numbers. But, their influence has increased and the Bush Administration of course has enormously facilitated that because they were open to [the fundamentalist Christians] as part of their base and helped them to mobilize. Not that they are a larger group, but their political influence is bigger.

If Thomas Jefferson were alive today, what do you think would be his strongest criticism of the current administration?

Making all the allowances that make Thomas Jefferson a product of his time… he would be frightened and appalled.