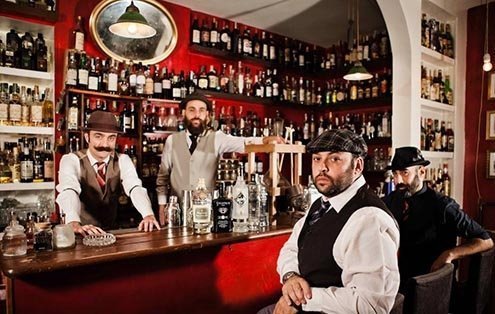 orget the dreaded apericena, the “drinks-and-dinner” contraction of aperitivo and cena, Rome’s newest drinking trend is Roaring Twenties inspired mixology. Thanks to the ambitions of handful of wildly inventive bartenders and businessmen, hard alcohol-shy Rome has developed a thriving speakeasy culture that in less than a decade has seen it pull even with — if not outdo — plenty of cities better known for their bar scenes than their antiquities.

Drinking in Italy has always had more to do with the pleasures of socializing than showing off how many high-octane shots you can down in five minutes. That, along with working hours that run well past 5 p.m., helps explain why Happy Hour never took off here. Instead, aperitivo culture usually begins about 6 p.m. and normally lasts until dinnertime, which is hardly ever before 8.30 p.m. (and later in summer). Now, the cocktail boom has extended that time frame well into the night — so long as you know the password.

Want to take a jaunt into the long-gone world of outlawed alcohol and tiny flapper dresses? Good. Here are my favorite Rome speakeasies. I’ve provided contact details and Facebook pages whenever possible but your best bet is to do your own homework and call ahead.

The Jerry Thomas Project This Prohibition-era styled joint was the first to serve world-class cocktails, basically kick-starting the speakeasy movement in 2009. The brainchild of bartending pros Antonio Parlapiano, Roberto Artusio and Leonardo Leuci, JTP is named after legendary bartender Jerry Thomas, whose 1862 book “How to Mix Drinks – The Bon Vivant’s Companion” is a bartending bible.

Membership is required and phone reservations are mandatory (accepted only between 2 and 6 p.m.) Patrons who appear in front of the tiny door are asked for a password (the answer to a weekly drink-related question hidden on the website.)

Once inside, enjoy the homemade gin and vermouth in skillfully crafted cocktails. The rules are strict: smoking in moderation, no cash payments, no talking about politics or religion, no sleeping on tables and no vodka. If you want a bottle of vermouth you can get it at the recently opened JTP Emporium. • Open 10 p.m.-4 a.m. Closed Sunday and Monday | The Jerry Thomas Project Vicolo Cellini, 30. Tel. +39.06.96845937/+39.370.114.6287.

Co.So. In 2013, Massimo D’Addezio, Valerio Albrizio and barlady Giorgia Crea left the Hotel De Russie’s Stravinsky Bar after more than a decade to open this high-end cocktail bar in the lively Pigneto neighborhood. It was a game-changer for Pigneto, whose bars were largely substandard.

Inventive doesn’t begin to cover what’s in store. Co.So’s Carbonara Sour is made with guanciale-infused vodka, egg white, black pepper, lemon juice and syrup. It’s sipped through a raw bucatino noodle instead of a straw. You can buy the furniture you sit on and there’s even a private “shower room” accessed through the bathroom. • Open 7 p.m.-3 a.m. Closed Sunday | Co.So. Cocktails & Social Via Braccio da Montone, 80. Tel. +39.06.4543.5428.

Spirito To enter this place you have to walk through a meat freezer door in the back of a popular sandwich shop (carni scelte, “prime cuts,” reads the sign on the door). Book ahead if you want to have any chance of getting in. Then, to let them know you’re there, buzz scarico merci (“deliveries”) on the sandwich shop wall.

The bar is made from a casino table, complete with roulette and blackjack stations. Depending on the day, they’re used for gambling — winner takes drink. The “Pepper & Fig” cocktail alone is worth the trip (Johnnie Walker, vermouth Cocchi, bacon and fig infused Laphroaig single malt, served with popcorn.) • Spirito Via Fanfulla da Lodi, 53. Tel +39. 327.298.390.

The Barber Shop Celebrated local barman Joy Napolitano opened this place in 2015, successfully reproducing a 1920s vibe. There’s soft lighting, crackling jazz and vintage glassware. Late night barflies know which buzzer button to press on a wall next door to a fake barbershop. There’s no password, but the doorman will walk you down a steep and narrow staircase to a green-walled underground cocktail bar. At one point, the place was a so-called filodrammatica, or amateur theater society. The cocktails shine. Joy’s great staff uses homemade syrups and fresh garnishes mixed from a handsome collection of bottles. • Open 6 p.m.- 5 a.m. Cash only | The Barber Shop Via Iside, 6. Tel. +39. 389.508.6037.

APT Located in the cellar vacated by the beautiful Casa Clementina bar in Monti, this quintessential speakeasy is a cozy cocktail lover’s retreat, with bookshelves, Chesterfield sofas and soft lighting providing a warm and homey atmosphere. The only distraction from complete speakeasy authenticity is a DJ and occasional live sets by rotating bands. A competent and courteous staff completes the setting. No password required • APT Via Clementina, 9. Tel. 392.710.5273.

The Race Club Brothers and avid bikers Diego and Dario Ferracani run this members-only place you get to through a motorcycle garage near the Coliseum. The basement speakeasy is decorated with vintage motorcycling memorabilia and plush antique furniture. There’s also a vintage TV set broadcasting grainy black and white footage of old motorcycle races. Signature drinks include the Race Club Sour, The Copper, and the Jalapina Mule. There’s a €5 membership fee the first time, after which you need ID to gain access. No password. Cash only. • Open daily 6 p.m.-3 a.m. | Race Club Via Labicana, 52. Tel + 39. 06.9604.4048.

Club Derrière For a city that now boasts more secret joints than Chicago in 1926, it’s probably fitting that this clandestine jazz and cocktail club is hidden in the back room of a crowded restaurant in the busy Pantheon area. Access is through a tiny backstreet door and the bar has a bank-teller feel. Talented Patrick Pistolesi (of Barnum Cafè, Caffè Propaganda and Gin Corner fame) masterminds the craft cocktails. Live music nightly. No password. • Open daily 10 p.m. =4 a.m. (closes at 2 a.m. on Sunday) | Club Derrière Vicolo delle Coppelle, 59. Tel. +39. 393.566.1077.

Argot You may need to sweet-talk the doorman to get into this basement speakeasy off Campo de’ Fiori. Cavernous and dimly lit, Argot draws inspiration from the secret fraternity of beggars and their cryptic language. The stunning cellar is the creation of three handsome and innovative bartenders. Their tricks include the Truffle Stolen, a blend of whisky, vermouth and white truffle oil. Fall reopening on Oct. 7. • Open daily from 9:30 p.m.-4 a.m. | Argot Via dei Cappellari, 93. Tel. 06.4555.1966.