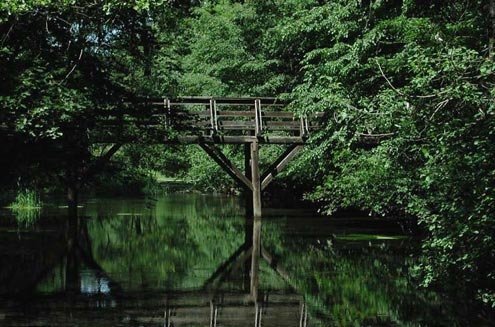 orty minutes from Milan, Parco Naturale Lombardo della Valle del Ticino is not only Italy’s oldest regional park but also an ideal place for biking, strolling, and Nordic walking. The park was incorporated in 1974 to protect the Ticino River and nearby habitats from urban encroachment in one of Europe’s most densely populated areas.

It includes 47 communities on 91,000 hectares (225 acres) of land that run from the town of Sesto Calende near Lake Maggiore to the Po River. The park is also a UNESCO biosphere reserve — an area considered friendly to sustainable development — though its status is under threat from busy Malpensa Airport.

Originating in Switzerland’s Ticino Canton, the river flows south into Italy and into Lago Maggiore, emerging again at Sesto Calende before continuing its 248-kilometer journey to the Po River. It was essential to supplying the Naviglio Grande, Milan’s largest canal, which acted as a conduit for materials used to erect the city’s medieval monuments, and later to supply local industries.

It’s mid-March and Marino and I, just over the flu, have opted for an easy, flat, three-hour, circular park hike along the Ticino near the town of Turbigo. We’ve brought along our Nordic walking poles.

From Milan, we’ve driven 35 kilometers west on highway A4, then taken state roads SS336 and SS341 north to Turbigo and the park. On SS341, just after the Turbigo roundabout, we turned right to Tre Salti, a village with ample parking.

Here, we walk down the road to a bridge over a deep, fast-flowing canal of discharged water from Turbigo’s large hydroelectric plant. We turn left and flank the canal, whose water now feeds a small local power station. The canal then drops three times in small falls, hence the Tre Salti name, “three leaps.”

Following the road and keeping right, we reach a second parking lot and a 70-meter-long, eight-meter-high suspension bridge over the canal, known as the Tibetan bridge. I peer at the rushing water below as the bridge sways in the wind and bounces with each of Marino’s footsteps. I feel like I’m on a rocking boat. It’s an adventure.

Finally in quiet woods on the other side, we follow the path to the Ticino where the trail runs along the riverbank. Known as the “azure river,” the Ticino’s blue water coursed rapidly around islands of bleached white stones. On the far shore is the Piedmont region and the Parco Naturale Piemonte della Valle del Ticino. Birds abound. There are 4,932 species of flowers.

Today, a few ducks hunker in the water out of the wind. No flowers bloom. Our path abruptly stops where the Turbighetto, a branch of the first canal, flows into the Ticino. We backtrack to a path into woods and then cross a low bridge over the Turbighetto. Underneath, deep, rushing water roars with impressive force.

“Look,” Marino whispers once we’re back in the woods. “A squirrel.” Uncommon in Italy, it darts along a log and scampers away. Nearby small irrigation canals flow tranquilly into flat farmland.

We leave the woods and walk under an iron railway bridge, il ponte di ferro. Erected in 1887, it was rebuilt after World War II. Under an enormous tree immediately after the bridge, a plaque commemorates the Vatican’s Swiss Guards. The Pontifical Swiss Guards were founded in 1506 at the behest of Pope Julius II. At the time, the Swiss were poor but their young men known as loyal, disciplined mercenaries. In the autumn of 1505, 150 Swiss soldiers and their commander, Kaspar van Silenen, camped near Turbigo after crossing the Alps. They entered Rome in January 1506.

We again follow the trail along the river’s edge, past playgrounds and swimming pools in the park’s lido area. Cyclists abound despite the cold.

Across the water on a river island, two men pan for gold. Carried down river from the Alps, Ticino’s gold has been known since Roman times. These days, panning is for hobbyists.

We turn east, away from the river to the “ex-area Vita Meyer.” The woods are rich in alder, beech and poplar. A papermaking company, Vita Meyer once operated a sand and gravel quarry here. The hole is now a lake. Today a bulldozer clears away the last remains of the dead industry.

Our trail, marked E1, is part of the Francigena pilgrim route that led from Canterbury to Rome. Another sign points down a 4.8-kilometer bike path through the bosco di faggiole, the beechnut forest.

We stay on E1. The woods yield to flat Lombardy fields, with a vast five-tower power plant in the distance. We reach the village of Padregna-Robecca and an old bridge over the Naviglio Grande. The asphalt surface along the canal is another wonderful bike path. On the other side, the hydrothermal power plant looms over the canal. Water from the Naviglio runs into the station.

We return to Tre Salti by ascending steps at the second, 17th-century-era bridge, to Via Roma in Turbigo and then walking back to highway SS346.

On the way, I ponder the future of an abandoned, cathedral-like factory beside the power plant. Its lofty pretences exemplify early 20th-century, Italian industrial architecture. I hope it finds new purpose instead of the bulldozer’s wrath.

More information about the park and its adjoining land can be found at www.parks.it, the Unesco site and a report in the Italian newspaper Il Giorno on the park’s troubled UNESCO status.