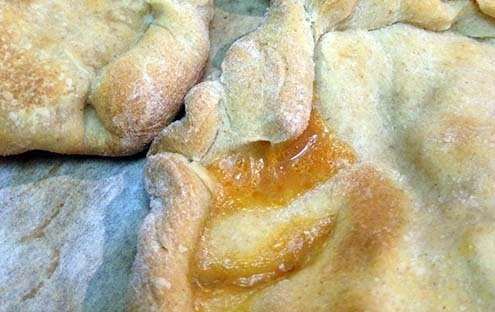 Calzoncelli stuffed with curly escarole — make sure to use the best flour.
A

visitor to Umbria might wonder why they see so little movement along the mighty river Tiber that crosses the region from north to south. There’s the occasional fisherman or canoeist but little else.

It hasn’t always been that way. For centuries, the part of the Tiber that runs through Umbria had a critical strategic function not so much as a busy waterway but as a highly defendable border — a line of demarcation — as well as a source of mechanical power.

According to local maps and archival documents, fortified watermills lined parts of the river throughout the 18th-century. It makes sense. Occupying a river mill was like occupying a citadel, a guarantee of self-sufficiency especially during sieges and invasions. A mill could also serve as an advanced outpost from which to scan the movement of opposition armies on the other side.

The local Tiber mills mostly manufactured cereal, and to a lesser extent olive oil. They were erected near roads and bridges to make it easier to transport the goods to local markets. In the early Middle Ages, milling was considered a public service with the miller subject to a formal investiture. He had to pay a hefty deposit to landowners for the privilege of producing goods.

All this rich history tumbled down on me one day during a trip to buy flour. I purchase mine from Giuseppe Ricci, who owns one of the last stone mills in the province of Perugia. He’s passionate student of riverine culture.

According to Ricci, the last of watermills were abandoned in the 1970s. By then, electric generators had taken over. But Ricci still grinds wheat and spelt with 1920s French stones used by his father. They’re mounted on an authentic wooden structure that was once an integral part of his family’s mill. He still employs a 500-year-old metal bowl as a measurer. Locals once paid the miller in flour: one bowl every 14 days in summer and one bowl every 18 days in winter, because the wheat was more humid.

The firm was founded by the late Mario Ricci, Giuseppe’s father, who was something of a local celebrity for surviving the brutal World War II Russian campaign and later being the last man to scamper across Ponte Vecchio near the medieval town of Ponte San Giovanni before the bridge was destroyed during one of many Allied bombing raid.

History lessons are wonderful, but they’re not why I shop at Giuseppe Ricci’s Perugia store on Via Bologna. His exquisite flour is made from pure ground wheat without the chemical enhancements now so popular and widespread in the flour industry. Its freshness allows it to retain a complexity of flavor missing from commercial flour.

He applies basic logic, producing enough flour to cope with intense demand but not enough that he needs to store it for any length of time. Storage requires chemical preservatives, which Ricci refuses to use. He respects history, waterways and flour with equal intensity, and I’m grateful.

— Twenty-four hours before starting, mix the dough ingredient and oil the dough. Cover it and let it rise in a draft-free area. If necessary, knead it briefly halfway into the process to knock off the gas and cover again.

— Make the filling a couple of hours before dinner. Wash the curly endive thoroughly and chop it finely. Mix the chopped salad with the tomatoes, salt lightly and transfer in a colander for at least one hour. It’s important to remove as much liquid as possible from the vegetable mixture. Squeeze it in a cotton towel if necessary. Transfer to a bowl, add one tablespoon of olive oil, and season the filling with salt and a sprinkle of black pepper.

— One hour before dinner, divide the risen dough into 16 equal pieces. Roll each into a ball. Place each ball on a lightly floured work surface and roll out into a thin disk of about 20 cm (8-inches) in diameter.

— Now assemble the calzoncelli (small calzoni known as pidoni). Work fast so they don’t fall apart. Divide the filling among the 16 disks leaving a 2.5 cm (1 inch) margin around the edge. Place one slice of mozzarella and 1/2 anchovy fillet broken into several pieces over the filling and fold the disk of dough to form a small calzone.

— Brush the calzoncelli with olive oil on both sides and place them in an oven tray lined with parchment paper. Bake them in a very hot oven until golden, 15-to-20 minutes. Enjoy your meal and think about the river of old.