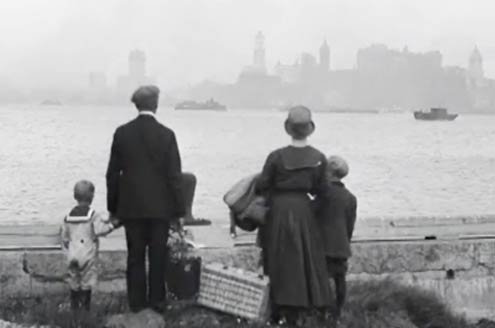 From southern Italy to a new world.
I

n his 91 years of life, 24 of which I’ve known him, my grandfather has asked very little of me, so little in fact that when pressed on the subject nothing comes to mind but his most recent request. “Write about me,” he said.

My grandfather is a reserved man, hesitant to boast about his fulfillment of the American dream, of his success. The story of his life is a series of anecdotes I’ve collected over the years. From time to time I take them out and savor them as one might do with sweets. The flavor of his stories cover three main chapters of his life: leaving Italy, the ship and the passage, the assimilation.

But it is only now, based on my own reverse “immigration,” that I begin to understand the immensity of his departure, so much riskier than my own. It is, I reflect, a series of events that can be most easily categorized through the senses.

Opening the story are the sounds of the piccolo. These clear metallic notes introduce my grandfather as a wiry youth in Calabria, marching through the streets as a member of the village band, a canopy of blue sky (or so I imagine it) stretched above him. I picture him, fingers pressed to the thin black tube, liberating each note. The air is thick with music and dust. Later, the piccolo will accompany him to the vessel and across the ocean, a small solid piece of the familiar, to be played during moments of boredom and loneliness. Sometimes, even now, it is tucked into the pocket of his sweater.

He was barely 15 when he boarded the boat. It was a moment in which he knew nothing and everything, a brief suspension in time between end and a start. His mother and sisters cried from the dock, waving bright handkerchiefs like scraps of their hearts, and the ocean rocked impatiently under his feet. It’s lucky he turned away just as the ship pulled away. What if one last wistful glance had convinced him to stay, to dive gracefully from the deck and propel himself to shore? The thread of his existence, of mine, would have been altered. I marvel at his courage, of gripping his fingers to the railing, instead whispering only “bella patria mia.”

The deft nimble hands of a stranger helped further his journey. Wearing a coat marked with a clear white “X” for illness at Ellis Island, the stranger took him aside, told him to hand over the garment, and quickly turned it inside out. The chalk disappeared, as did the marked man, my grandfather. Who was this stranger and where did he go? Did he act out of empathy, morality or from simple kindness? In examining my grandfather’s memories, those who aided him, cleared his path, slip in and out of his history like thread to a needle. If I knew the identity of the stranger I’d send flowers to his grave.

A sense of taste and a culinary tradition are paramount to an Italian family. They are passed down from parent to child, and from that child to their children.

But my grandfather’s first meal in America wasn’t motivated by the pursuit of the familiar or of the comforting tastes he knew, traits that would serve him well as he adapted to his new country. Waiting for his father to claim him at the immigration station, his insides restless with hunger, he purchased a banana, exotic and rare in southern Italy. The fruit’s thick yellow skin, confusing at first, yielded easily under his fingers.

Later, his deciphering palate would help cement his American legacy. His essential sense of ricotta, provolone, and mozzarella bloomed into a small business and then a big one. “Eat that cheese,” my father would say to me, a kindergartener, when I frowned at the puddle of ricotta on my plate. “It’s sending you to college.”

But does one begin to grasp love, the most elusive and mysterious of all the senses? How to explain the brief life and young death of his first wife, who left herself only in his son’s eyes and smile? Or to know how to articulate the abandonment of the nation one was born in for another, of finding joy in new places, of the hesitant slow love of an arranged marriage that grows out of habit and negotiation? How to describe the love for their children, now graying at the temples? How can I, 24 and still whole, possibly understand these things?

So with my grandfather we talk instead of the piccolo, how to make yogurt from scratch, the boat. Alone, I sew together the things I do know and make peace with the empty spaces. Later, as the time comes for me to return to Italy, we embrace before I head to the airport, acknowledging a deeper truth of passage that we both now know.