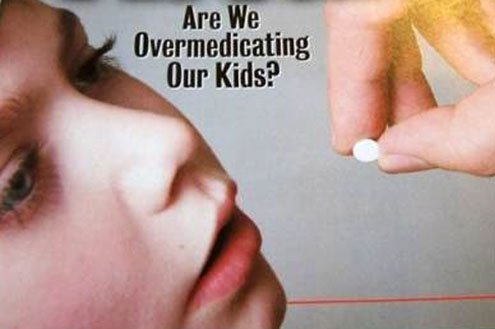 In 1996, "Newsweek" weighed in on Ritalin, and the debate hasn't subsided.
H

e said, “I would like to suggest a trial of Ritalin,” to which I eloquently replied, “Whoa.” I followed this response with the dropping of my mandible and the furrowing of my brow. It was not a good look for me.

Like an old Betamax, my mind suddenly rewound our less-than-pleasant experiences with several neuro-psychiatrists over the past two years.

“I would say your son is autistic,” said one ignorant Roman doctor.

“Your son has an IQ no higher than 70,” said an apathetic physician who administered the test in Italian to a nearly non-verbal three-year-old.

“Your son has encephalopathy, which is a fancy word for brain damage,” said the overly zealous American resident at a top hospital. “If he catches up by age five, he should be okay. If he is still delayed, he may always be behind.”

In recent years I have lived almost solely for the purpose of saving my son and tracking his progress. Hearing diagnoses became my specialty. In fact, his treatment became our family’s first priority, sometimes to the detriment of the whole. But all the while we knew we were fighting to help him have a great life.

This summer, we met a world-renowned specialist who offered what he called his Gestalt. “Your son,” he said, “is a classic premature boy who has minor neuro-motor delays and ADHD. At the very least, he is of average intelligence. He will most certainly have learning disabilities and you should put much of your resources in to dealing with these…”

Many parents wouldn’t be thrilled after a comment like that. But considering what we’d already endured — including suggestions of Fragile X syndrome, a genetic condition, and Smith Lemli Opitz Syndrome, a chromosomal deficiency — ADHD and learning disabilities were like winning the parenting equivalent of the Powerball Lottery.

With joyful tears pooling around my eyes, I tried to interrupt him. But this guy was good. He knew his job, and my next question. With a smile he said, “And yes, he will go to college.”

“Will he go to Brown?” I inquired, trying to deflect with humor.

“That I can’t guarantee,” and he chuckled.

But that was good enough for me. Hell, it was great for me. It was one of the single most beautiful moments of my life and one of the few times I have ever known pure gratitude.

My whole life perspective instantly pirouetted. I felt prettier, lighter — had I lost weight and didn’t know it? Suddenly the doctor seemed handsome and simpatico. The sun seemed to shine through the windowless room. Butterflies appeared to fly by with rainbows stretching through the hallways. Were the children skipping down the corridors with lollipops?

My son Leonardo smiled and hugged me and I thought I heard him humming Bobby McFerrin’s, “Don’t Worry, Be Happy.” This delirious happiness continued until the demigod doctor added, “I would like to suggest a trial of Ritalin.”

At that instant, all the Shangri-La vacated the room, replaced with my less than attractive mug uttering, “Whoa.”

Gone was my readiness to saunter from his office to the hospital valet parking attendant. Now I was stunned and confused.

On one hand, I was delighted with his new prognosis, but I was also dismayed with the suggestion of giving amphetamines to a five year old.

Though he’s bilingual, my son has difficulty with speech production and comprehension; so we get him speech therapy. He can ride a two-wheeler and do risky tricks on a scooter, but he also suffers from double vision and two-dimensional sight; so we get him eye motor therapy (he also faces eye surgery). His energy level is astounding. He can run faster and longer than most kids twice his age. At the same time, his hyperactivity causes him to be impulsive, fidgety, and to act inappropriately.

And what do we do for that? Well, we correct him. We design behavior charts with reward systems. We beg, we plead, and sometimes we scream. Last time I checked, screaming was not therapeutic for anyone.

So it became clear, we needed more help. I called my new favorite person on the planet (aka, the doctor) and asked for a 30-day supply of methylphenidate… Ritalin. And I gave it to my son.

That afternoon, he sat and colored with his cousin for 30 minutes. Days later, he starting writing his name. A week or so later he built an elaborate city in his room full of streets and train tracks, stores, museums and restaurants. He began to make friends at the park. He started kindergarten two weeks ago without crying. He now sits for the entire hour of therapy with his therapists (before it was 20 minutes). And the best part is that he’s still a high-energy pistol, still a pain in the neck, still himself.

Parenting forces us to make some hard calls. For us, this was one of them.

Am I psyched to tell the world I give my kid a daily dose of amphetamines? No. Am I excited to have found a medication that gives my son the opportunity to grow and learn and make friends? I can’t answer that right now because I’m too busy with other things — including filling out my son’s early admission application forms for Harvard.