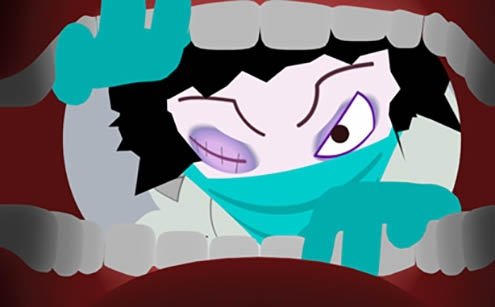 Your type of saliva just naturally creates cavities. Each filling would cost me €90.
A

fter living in Italy for around six years (seven if you count my time as an abroad student), I’ve convinced myself that I’m more a local than a foreigner. My own culture is slowly becoming stranger than my adopted one.

I no longer struggle to express myself in Italian. To the horror of my mother, the bidet has gone from a cringe-worthy bathroom accessory to an object worthy of praise. Despite the spring-tinged weather, I continue to don my goose down jacket, eyeing tourists in flip-flops and T-shirts disdainfully.

A few months ago, I decided to find a local dentist instead of scheduling appointments during vacations home in the States. Rather than going to my physician father’s colleagues, who had gracefully fit me in over the years, it only seemed right, as an adult indefinitely living abroad, to take care of matters on my own.

Rita, an acquaintance at the gym happened to be a dentist. Impeccably toned and in shape yet with a life-long sun worshipper’s complexion, Rita could’ve been anywhere between 50 and 70. Promises of a sconto, or discount, landed me in her studio for a routine cleaning. She flossed and buffed my teeth in six-inch heels, and up close I could see how the foundation she wore caked into the lines around her eyes like spider webs.

Rita was also a serious Catholic, and she played a live-streamed mass from her radio. The priest’s voice intermittently reminded us to pray for various saints and the pope. Rita asked if I was raised Catholic and invited me to her Tuesday prayer group. By the end of our dental session, she revealed she refused to date divorced men (it went contrary to church teachings), her diet was gluten-free, and I had a staggering nine cavities. Nine? Nove? I flushed with shame. I lazily hadn’t visited a dentist in a year and a half. Visions of daily cappuccinos concocted with more sugar than coffee surfaced.

Rita marked with a Number 2 pencil on a dental diagram where each cavity cozily resided, methodically working its way down to the root.

“It’s the saliva in your mouth,” Rita informed me wisely. “Your type of saliva just naturally creates cavities.” Each filling would cost me €90. I mourned for my wallet, but reminded myself that I did have savings. The thought comforted me. Savings, I told myself sagely, weren’t for frivolous vacations but for the mundane yet necessary. I felt grown-up.

During the first few appointments, Rita would drill my tooth without anesthesia until I became nauseous. She then drew out a needle and mercifully injected my gums into blissful numbness. She talked about her disdain for Hillary Clinton, who she swore was a lesbian. She told me about how younger men chased after her, but how she wasn’t interested, and pressed me to send my expat friends to her practice.

Throughout the fall, I continued to treat my cavities, Rita digging and tsk-tsking and sealing the holes in my teeth. After five cavities, I decided to ask Rita just how many teeth were left. “Oh, three, four? I don’t remember. I just found another one too, so who knows.” On my way to the bus stop, my mouth crooked from anesthesia, I wondered why Rita only accepted cash, and asked an Italian friend if that was how things were done. Rome, I reasoned, was always a little behind.

“No, of course not,” buzzed my phone. “Please tell me she at least gives you receipts.”

She hadn’t. My heart sank uncomfortably, and I frowned, or at least half of my mouth did. I cancelled my next appointment. The following week Rita began calling me, first Friday and then Saturday, asking me to reschedule. I didn’t pick up. A few days passed, and she texted me. “Where are you? We need to finish your teeth.”

Over Christmas, I ceded and went to a dentist in Rhode Island, an acquaintance of my father. His secretary asked me to fill out a patient history form in a well-lit waiting room, with neat stacks of People magazines. Rita, I noted, had not bothered to learn if I was allergic to penicillin or had gum disease in my family. The ruddy-faced dentist asked for my most recent dental X-Rays. Rita hadn’t taken any. “But it’s illegal to drill someone’s teeth without X-Rays,” said the dentist, scandalized. “They could take away her license, at least here.”

He inspected my teeth, and explained there was no way of telling if I’d ever had cavities as Rita claimed, but given my age, hygiene, and outstanding dental history, he believed it to be impossible I’d ever had five cavities, let alone nine. To add insult to injury, my fillings were also “shoddy.” He advised me to find a new dentist.

I haven’t seen Rita since October, and the phone calls have stopped, at least for now. My Roman friends gape when I tell them the story, patting my arm, and reassuring me it’s because I just didn’t know, because I’m straniera. I block Rita’s number — and pledge to see the American doctor come summertime.