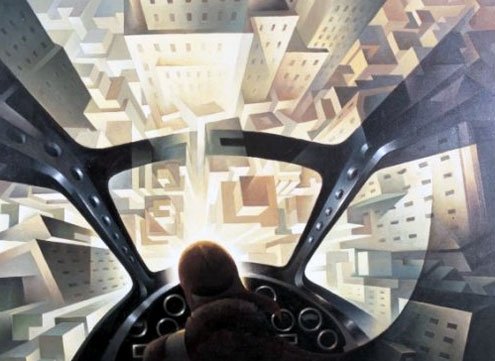 n Italy purged of the bounty of art and antiquities that vivify its past would seem sacrilegious. Yet this was the radical vision of Italian Futurism, an avant-garde movement that sought to reinvigorate the country based on the dynamic new technologies sweeping the early part of the 20th-century. Italy, Futurists proselytized, was a “dealer in second-hand clothes… a land of the dead, a vast Pompeii.” Italian Futurism was a wake-up call to energy, progress, action, speed, and “war — the world’s only hygiene” — as a means of severing Italy’s superstitious attachment to the past and delivering it into modernity.

Futurism was born with publishing of the “The Founding Manifesto of Futurism,” which appeared on the front page of Le Figaro, France’s preeminent newspaper, on Feb. 20, 1909. The manifesto’s bombastic author was also the movement’s ideological architect, Fillipo Tommaso Marinetti, an anarchist intellectual who wrote prose and poetry in both Italian and French and would eventually pledge allegiance to Benito Mussolini’s fascism in the 1920s.

In the whirling eye of the industrial age, Marinetti argued, Italy was an anachronism, “fatally exhausted, shrunken, beaten down” by its sickly nostalgia for the past. In order to shake the disease, cultural expression as it was conveyed in art, literature, sound, performance, and architecture had to be in union with “the living” and no longer with the grand graveyard of history he saw Italy as representing.

Marinetti was determined to reinvent the aesthetic wheel by provoking revolt across the Italian cultural gamut. “Museums, libraries, academies of every kind…” had to go; so did moralism and feminism. They mired Italy in memory lane.

Marinetti proposed a high-octane alternative composed of speed, noise and the machines of war. “A roaring car… is more beautiful than ‘The Victory of Samothrace,'” he famously declared.

The movement, which came to be defined by its chilly and vigorous manifestoes, quickly amassed a formidable circle of disciples who set out to change cultural expression through sonic and visual impact.

Along with Marinetti, writers Aldo Palazzeschi, Corrado Govoni, and Ardengo Soffici exalted Futurist themes in literature using a style they called mots in libertà, or “words in freedom.” It was language defrocked of lethargy — no verbs, adjectives, adverbs, or punctuation — and stripped down to a barrage of image-inducing nouns. Parole in libertà, inspired by onomatopoeia, experimented in noise and phonetic poetry.

Futurist poets and writers held “evenings” that resembled punk gigs more than civilized literary gatherings. They spewed their mots in libertà from the page at Gatling gun speed, berated audiences with insults and obscenities, and routinely incited riots by hurling whatever they could get their hands on into the crowd. Successful gatherings usually ended with at least some of the participants on a gurney or in the slammer.

If its poets were punks, Futurism’s artists were its rock stars. In 1910, Umberto Boccioni, Carlo Carrà, Luigi Russolo, Giacomo Balla, and Gino Severini signed the “Manifesto of the Futurist Painters.” It condemned Italy’s archaism and promised a “crucial revival of aesthetic expression” in line with “the triumphant progress of science.”

Futurist painters were showing in Italy by 1911, but Severini knew it was imperative that they get a viewing in Paris, where Picasso and Braque’s near-abstract Cubism was peaking. A resident of the hilltop artists’ enclave Montmartre since 1906, Severini knew Braque, Utrillo and Apollinaire and was instrumental in getting Boccioni and Carrà into Paris’s avant-garde studios.

When Marinetti organized a major Futurist exhibition at the Bernheim-Jeune Gallery in Paris in 1912, the art world was amazed with how the movement had absorbed and adapted Cubism to suit its own themes.

Like the Cubists, the Futurists fractured objects and colors, but did this through what they called “lines of force” intended to intensify psychological and emotional states of experience.

Inspiration came from the cabarets, every kind of machine, and the streets. Canvases portrayed “the iron network of speedy communications… the frenetic life of our great cities and the new psychology of nightlife.” Over time, Futurist art moved increasingly toward abstraction, “a sign,” Severini said in 1913, “of that intensity… with which life is lived today.”

In 1914, the belligerent energy Futurism had sought to stir up found an outlet in World War I. Not surprisingly, the hysterical Marinetti, whose dubious politics had always underscored the movement’s artistic merits, wanted Italy to enter the war, which it did on the side of the Allies in 1915. Two of the movement’s seminal figures, artist Boccioni and architect Antonio Sant’Elia, enlisted soon thereafter and were dead within a year.

Although the movement saw three further incarnations before fading out in the 1930s, the two deaths marked the beginning of the end of Futurism’s first phase. Ironically, the movement was ultimately undone by the very machines and technology — and war — it had helped deify. The tools of a visionary future instead became the tools of 20th-century horror.