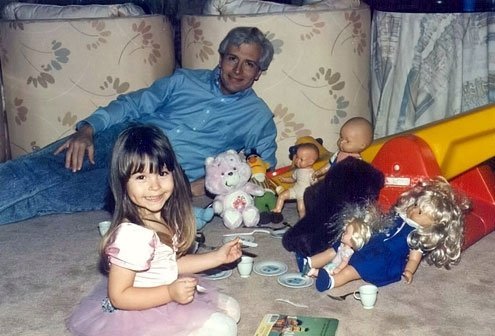 The author as a child with her father.
W

hen I was five years old, I spent most of my time in t-shirt dresses lovingly sewn together by my grandmother. The ponytail on my head was usually topped off with a huge puff of tulle, a creation of my equally craftsy mother. I lived in those outfits. I never gave them much thought.

Even though it was the cusp of the 1990s, no one could have mistaken me for dressing like an adult. Even when my mother wore a matching pattern to mine.

Maybe I was an anomaly. It’s possible that while I dressed in a t-shirt dress and tulle my peers were actually trying on fishnet stockings and cone-shaped bras a la Madonna. But I doubt it. Even with MTV in its nascent stages, images of womanhood, and of feminine sexuality, weren’t quite as ubiquitous as they are today.

Italy is no different from the United States in that regard. Some might say it’s more extreme. The “money honeys” on U.S. television might be curvier, blonder and prettier than their Wall Street monitoring jobs would seem to require, but in Italy most female anchorwomen aren’t even anchors. They’re veline, half-dressed beauties paid to cavort and shimmy before and after a man reads the night’s news.

If America’s advertising often sexualizes women, even girls — who can forget the “nothing comes between me and my Calvins” campaign, or the Abercrombie & Fitch catalogues, forced out of print in the States for their sexually charged photographs of half-nude adolescents? — Italy’s billboards employ lingerie-clad women to peddle not only fashion and fragrance, but also food and furniture.

Not that it’s all bad.

Italy’s treatment of nudity is at least frank. In most fashion spreads a breast is just a breast. In some cases, children are pictured naked (which they often are). It’s refreshing.

Americans by contrast can get a little hysterical. I was at a pool last summer when two little girls came in. Without so much as a look, they started undressing. Off came the shoes; off came the shirts. Before they could finish, someone half-ran over and urgently asked them to put on their swimsuits elsewhere. The two girls looked at the well-meaning ward of their modesty with blank stares. They spoke to each other in Dutch, and left. When they came back, they wore swimsuits but also wore slightly embarrassed expressions that hadn’t been there when they’d been innocently stripping down to their skivvies.

A child’s sense of careless, asexual nudity is natural. More potentially disturbing is that children ape what they see around them. That’s why I once toted around a baby-doll and why I forced my father through endless tea parties and imaginary dinners.

These days, though, children are going further than that traditional copying. They’re mimicking Lady Gaga, Shakira and Rihanna — and corporations are cashing in.

A study earlier this year examined 15 different retailers’ websites and found that fully a third of the clothes marketed to “tween” girls were sexualized. In the spring, Abercrombie & Fitch (yep, them again) came under fire for selling a push-up bikini top to girls aged 7 to 14.

When I walk by a Limited Too store in the States, I’m constantly taken aback at the crop tops and short sequined skirts that, a few sizes up, would better suit a club than an elementary school.

Sure, clothes are only clothes. It might not really matter if you’re wearing a leopard-print shirt if you’re playing dolls. What’s more problematic is that the mimicry doesn’t stop there.

I recently spent some time playing with the daughter of a friend. She’s four, adorable, and — thanks to her always-fashionable and modestly-dressed mother — might just be the best-dressed little girl in Rome. Today, she wore leggings, a dress, and a sparkly pink headband.

One of her favorite games is guessing which hand I’m holding a crumpled-up paper ball. She squeals when she’s right.

This time I showed her that I’d brought my camera. Without hesitating, she threw herself onto the floor, crossed one leg over the other in the kind of thigh-baring position usually seen on lingerie models, and waited patiently. Since her mother doesn’t lounge around the house in contorted poses, I couldn’t imagine where she’d learned the pose. And then it came to me: This is how she sees women. Not women she knows, but the TV veline and the models plastered lasciviously on billboards.

Growing up as a young woman in the 1980s and 1990s was hard enough, but today, surrounded by these images, the process must far harder. All other differences aside, it’s one thing that’s just as difficult in Italy as it is in the United States.