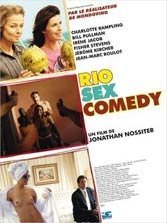 Rio de Janeiro is the backdrop for American director Jonathan Nossiter’s look at an eccentric cast of foreigners trying to find their place in Brazil. There’s William (Bill Pulman), the new U.S. ambassador, who decides to escape to the favelas (yes). And Charlotte (Charlotte Rampling), a famous cosmetic surgeon who tries to dissuade body-conscious Brazilians from seeking her services. Meanwhile, a French documentary filmmakers work on filming the plight of Brazilian domestics. Nossiter jump-cuts between the favelas, scenes from middle class expat life, and Charlotte’s plush office.

The most bizarre and funny scene occurs not in a bedroom but in a boardroom. A disguised William joins an NGO to help make a pitch for aid projects, some of them… oddball. It’s a good spoof of international organizations, NGOs, and the diplomatic world in general.

Rampling is in top form, with an ironic sense that recalls young and wisecracking Lauren Bacall. Nossiter pokes screwball fun at sexual mores, religion, and class, while at the same time tackling more sobering issues, including AIDS. The Franco-Brazilian production can be funny at times, but meanders far too much.

Interestingly, Nossiter is a trained sommelier who has compiled wine lists for restaurants in New York, Paris and Rio. He also directed the Sundance-acclaimed “Sunday” (1997) and the wine documentary “Mondovino,” which was nominated for a Cannes Palm d’Or in 2004.