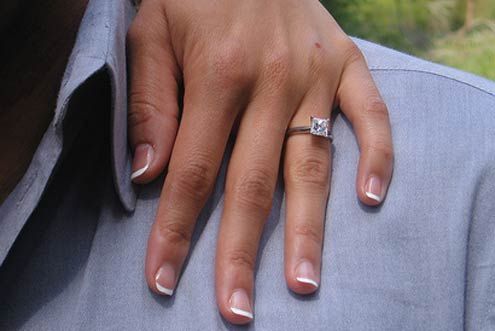 s you get past your mid-twenties, two topics tend to dominate conversation among people involved in serious relationships: weddings and babies. Since one traditionally precedes the other, I’m getting my share of questions on the first. It’s normal, when you’ve been seriously involved for more than two years, for family and friends to want to know when your significant other is going to pop the billion-dollar question.

Imagining how a boyfriend will propose is part of every young woman’s fantasies. As a little girl, I dreamed about the romantic location he might take me to and what the ring might look like. That dream was buried soon after I moved to Italy two years ago. After discussing marriage with some of my girlfriends in Rome, I learned to my dismay that marriage proposals aren’t common among Italians. I remember thinking, “What!” One friend picked up on my thinking because she quickly followed up with, “Yep. Couples go out for a few years and then just talk about it one

day and set a date.”

How un-romantic! I just couldn’t fathom the idea.

Many of my married American girlfriends have at least one story to tell their kids about how their fathers proposed. My friend Jacky’s husband recently re-enacted his Venice proposal by taking her to the famed Venetian hotel in Las Vegas. The real thing involved a gondola ride and having her look through a scrapbook that he made filled with photos of their Italian trip. On the last page was a love poem written by him, carved with a hole to fit a ring box inside. Marriage followed.

Another friend, Eileen, got the question two years ago near Christmas. Her boyfriend dressed up as Santa and went around asking the kids in their respective families what they wanted for Christmas. Eileen was sure she was getting a Coach purse when Santa came her way. But when this Santa got down on one knee, something else was said and, later, done.

Since Italy is a country filled with enduring traditions and respect for family I assumed Italian men would go as far as seeking permission from their girlfriend’s father before walking them down the aisle. Never in a million years did I picture myself pulling out a calendar and picking a date during an A.C. Milan game.

I decided to take it up with the source. I marched up to my boyfriend Fabio and demanded to know the truth about Italians and marriage. I reasoned that we might as well get it all out in the open, because traditions are traditions. To my chagrin, he confirmed the anti-romantic doctrine. According to Fabio, not only did most Italians not propose, but engagement rings were not part of the picture.

“What’s the point of two rings?“ he wanted to know.

Um. It’s just um… a tradition for some Americans, I explained. He still didn’t understand. I tried to put it into simpler terms. “In America, when the man asks a woman to marry her, he gives her an engagement ring which is usually a diamond,” I said. It was hard for him to understand where diamond rings fit in with traditions. Instead, he said the tradition sounded very materialista.

And I had to agree with him just a wee bit. So I backtracked and reworded: “Well, it’s not so much about the ring. It’s the action of asking for a woman’s hand in marriage that’s traditional for us.”

Suddenly, a flicker of awareness.

After going back and forth with Fabio, I gathered the girls to discuss how we could smooth out this confusion. If fate was to keep us in Italy, upholding American ring tradition and sustaining childhood fantasies of marriage was still a must. We weren’t asking for anything elaborate or difficult: just for the question to be asked. Our strategies worked because months later two of my Rome friends are engaged — with rings.

A few Sundays back, during a not-so-important soccer game (I say this because he would have been comatose had A.C. Milan been playing), Fabio turned to me and said, “How much does an engagement ring cost anyway?” I told him it depended on how big or small the diamond was and the quality of the stone. He turned back to the game.

A few minutes later came another question: “Ma, perche un diamante?” Can’t it be some other kind of stone?