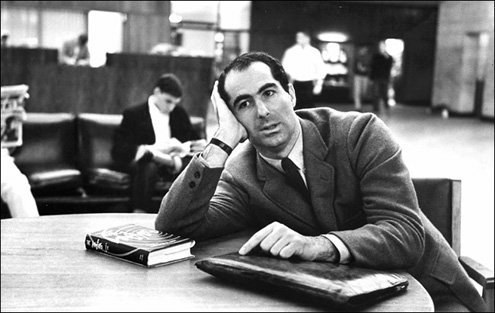 ey! A very familiar Roth is back. On the heels of his latest novels — “Mortality,” “Everyman,” “Exit Ghost” — all concerned with aging and death, he returns to the period of his own youth in home town Newark, New Jersey.

It’s 1952. Narrative voice for Philip Roth’s 26th novel (“Indignation,” Fourth Estate, 2008) is Marcus Messner. College sophomore and working class son of a kosher butcher. The Marcus story starts in the city that was kickoff setting (and often highlight) for Roth’s half century of work. For his dissection of individual life marked by social currents. In Roth’s fiction, Newark holds those typical neighborhoods where young people grow up. To discover that sometimes a nightmare or two can leak from the American Dream.

So it’s 1952: the Korean War death-tolls mount. Within the year, Marcus Messner will be sabered in a foxhole, like the rest of his battalion.

Promise to the reader: This column will never squeal, “The butler did it!” for a story under review. Unless: the author wants you to know. Roth does. He subtitles nearly the entire novel “Undermorphine.” No surprises. Our narrator lies in death’s waiting station.

During his undermorphine reverie, Marcus Messner relives the indignations, love, joy, and rage endured during his entire time on earth. Roth puts the focus squarely on Marcus’ life. Recalled while his body prepares to shut down forever.

It’s an account charged with the passionate voice of a youth struggling to independent manhood. While maintaining some handful of integrity and pride.

Marcus’ account is classic Roth. About a decent, often perplexed figure. Someone with an average baggage of human frailties. Liable to mistakes. But with a stubborn determination to follow his own path. That can be a tough task. As Marcus learns, and tells us. Speaking from death’s antechamber.

Though all Marcus ever wanted was life. Oh, and straight A’s at school. Because after graduation, after student exemption concludes, every male is inducted to the Korean death trap. Straight A’s can be a launch into army intelligence. Far from frontline combat. Far from those slashing Chinese bayonets.

A missed dream. The one this kosher butcher’s boy imagined he could make his own. If only…

If only: the butcher didn’t change from solid reliable father to raging psychotic. Worried about the dangers to his grown son in the adult world, about massing war casualties, his son’s possible death on a Korean battlefield. Suddenly butcher Messner knows: “the tiniest little thing can destroy your whole future.”

If only: his father’s madness didn’t drive Marcus to escape Newark. Transferring from his multicultural hometown college to faraway Ohio. To Winesburg College. Shades of staid elm trees, and a nod to Sherwood Anderson. Here’s a campus where the genial 1950s “traditional” life is enforced with a smile, and unforgiving rules. But it’s not Marcus’ tradition.

If only: a fixed number of non-denominational (read “Christian”) chapel attendance wasn’t one of those rules. Applied even to an Atheist-Jewish student, as Marcus prefers to be called. When he does attend he silently scans the book’s title, “In-dig-na-tion.” (According to Roth, it’s the key word in a Chinese Revolutionary song he, like Marcus, learned in elementary school. When the Chinese were fighting beside the Americans as allies. It’s an anthem to defiance. That America’s antagonists in 1952 Korea are hugely aided by Chinese forces is the author’s overforced irony — a rare Roth failure. Because there are plenty of if onlys that underline his take.)

If only: indignant Marcus didn’t refuse the penance for his absentee “crime.” And didn’t tell Dean Caudwell “Fuck you!” That equals expulsion, and draft to frontline Korea.

Before college, the butcher’s boy worked long hours in his father’s shop (“I knew what blood looked like, dripping out of the beef onto my hands … seeping through the brown paper bags.”) Marcus never got used to all that blood, in Newark, or Korea.

In the short last section a different narrator will conclude Marcus’ tale. For “the Chinese steel blade that sliced him up was as efficient as any knife (he and his father) had used in the shop.” Marcus has left the morphine waiting station. He’s in a casket, on his way home. To a country he had only just — and not happily — begun to understand.

Marcus wasn’t born into the enveloping safety of the American Dream. Stubborn honesty and his otherness left him unprotected. So easily, the consequences of his “tiniest” life choices knocked him down. Just as his father had feared. And the Korean War, the tsunami we call history, did the rest.