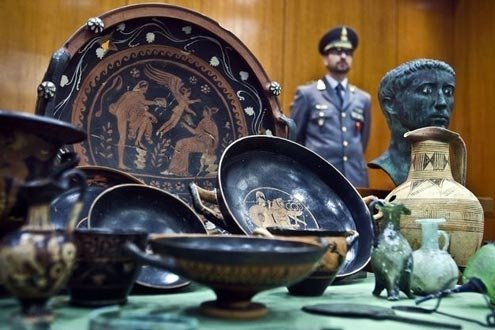 In 2009, Italy recovered items looted from tombs outside Naples and Venice.
T

hink of an artifact, painting, sculpture, or any cultural object you hold dear and imagine it being stolen or destroyed. Consider “The Turtle Fountain” in Rome, Picasso’s “Guernica” or Giacometti’s “Walking Man.” The significance of each is deeply personal. But in addition to the intimate rapport, there is also collective appreciation and societal responsibility for these objects. We as individuals take for granted that objects we love are being preserved and protected.

The looting of the National Museum of Iraq during the invasion of Baghdad and the earlier destruction of Buddha statues in Bamiyan, Afghanistan were wake-up calls for many of us. We have recently learned of the peacetime purchasing — predominantly by American museums — of artistic and archeological objects of uncertain provenance, at times obtained illicitly. We have come to realize that preservation of the world’s artistic heritage is a fragile endeavor at best.

Stealing cultural objects has a long history. In wartime, looting gave invading nations a pretext to appropriate the most valued objects of conquered cultures. But peacetime looting exploits a different rationalization, that of placing cultural objects under one roof where they can be studied and preserved. This centralizing philosophy has encouraged indiscriminate procurement of undocumented works of art. Items are torn from their original sites; pieces are cut up, refaced and made more “marketable.” As a result, our understanding of a culture’s heritage, best gained from studying an object in original context, can be lost or misinterpreted forever.

As difficult as it is to protect national treasures, officials and institutions continue to do so, at state, international and private levels.

Countries have sought to combine international cooperation with local laws. Signatories to the Hague Convention of 1954 for the Protection of Cultural Property in the Event of Armed Conflict are required to identify and protect cultural property during wartime. The UNESCO Convention on the Means of Prohibiting and Preventing the Illicit Import, Export and Transfer of Ownership of Cultural Property was enacted in 1970 and was followed by the enactment of the UNIDROIT Convention on Stolen and Illegally Exported Cultural Objects in 1995.

The UNESCO Convention seeks to control trade of cultural objects and provides a means by which governments can co-operate to recover stolen objects across borders. The UNIDROIT Convention provides private individuals and institutions the rights and means to reclaim stolen objects in the courts of the country in which the object has been found. In addition, INTERPOL maintains a special force to investigate art crimes.

Italy’s resolve in this field is renown for good reason. It has seen its artworks plundered over the centuries and has taken a tenacious (and instructive) approach to applying international conventions and internal laws. In 2005, Marion True, former curator of antiquities at the J. Paul Getty Museum, was indicted by Italy for conspiracy to traffic in illicit antiquities. In 1997, Italian art dealer Giacomo Medici, a Getty supplier, was arrested and charged with dealing in stolen ancient artifacts. He was convicted and sentenced to a 10-year prison term in 2004. The trials brought to light a long-standing pattern of underground trafficking in antiquities from Italy and other countries. Museums such as the Getty have since agreed to return many of the objects.

Italian law focusing on this issue is highly refined. A few years ago an American woman who resided in Spoleto died leaving an estate that included many historically important Italian books, manuscripts, paintings and archeological objects. Her American will bequeathed the property to an American university. She appointed an Assisi attorney as her executor, giving him the power to sell off what university didn’t want, with the proceeds going to the school.

The executor filed all the necessary papers to open the estate administration. He then sold the unwanted estate objects through a reputable Florentine auction house, which had received an estate sale authorization from the local Italian cultural ministry office. But a month after the auction, the Assisi attorney was served with criminal papers on charges that he’d failed also to notify the cultural ministry of a transfer of title of the archeological objects, in this case from the deceased to the university.

The auction house’s notification to the Florence ministry office that it intended to sell the items was deemed insufficient. If convicted of the crime, the attorney faced a jail term of up to one year and a fine of up to €77,469. While the story might seen to fall under the category of Italian red tape gone amok, it instead demonstrates the country’s meticulous legal mechanisms when it comes to regulating the sale of cultural artifacts.

And the system works. In December, the culture ministry announced that a pair of looted Roman statues purchased by a New York gallery in 1984 would be coming home following an agreement with Louisville, Kentucky-based health insurance company that purchased them.

Italy is not alone in aggressively defending its heritage. The U.S. has also stepped up its efforts. The era in which museums can purchase antiquities for their collections without extensively documenting their purchases is ending. In July, federal officials arrested three people on charges of involvement in a network to loot artifacts from Egypt, Libya, Iraq and Afghanistan.

Despite this progress, the audacity of looters remains stunning, all the more reason to appreciate government intervention. It’s their policing that helps ensure that art comes before money.