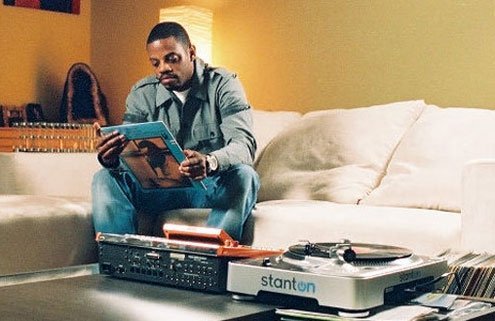 here remains an ongoing search for the heir (or heiress) apparent to arguably the most important beat constructionists of the last decade. Every year, or so it seems, we’re told some new producer is conjuring up the ghosts of James Dewitt Yancey (a.k.a. J Dilla) or following on the heels of Otis Jackson Jr. (a.k.a. Madlib). Jackson is still among us; Yancey is not. But the importance of both remains evident.

Appropriately, the candidate best able to channel their music — at least this year — is a musician who worked with them both, Detroit’s Karriem Riggins. On his latest album, Alone Together (Stones Throw), Riggins proves himself a consummate beat conductor.

Alone Together‘s convincing strength is helped along by its powerful pedigree. Riggins is a master jazz drummer who has played with Donald Byrd, Bobby Hutcherson and Oscar Peterson. But he’s also had a hand in producing for contemporary funk and hip-hop acts, including Dilla’s own group Slum Village, as well as Erykah Badu, Talib Kweli, and The Roots. Riggins also laid down tracks and worked with Madlib as Yesterdays New Quintet on 2007’s Yesterdays Universe. He can travel back and forth between worlds with effortless ease.

The same is true for this 34-track solo debut, so titled after a jazz standard that begins with the words, “Alone together, above the crowd.” He’s certainly hit on that here, looping funk samples and coloring in live jazz recordings with his own production work throughout the album.

Alone Together isn’t always smooth listening. Tracks clip awkwardly at times and finish not a moment later than the idea. But that’s part of the appeal – Riggins remains economical even when he hits on pure gold (which he does, often, on tracks like “Alto Flute” and “No Way”).

It’s an instrumental hip-hop record that blends jazz, funk and soul together in a way that belongs in the rarefied atmosphere of kindred spirits like Madlib’s Beat Konducta series and Dilla’s Donuts. Higher praise is hard to come by.

Traversing space of a very different kind is dubstep kingpin Mala on his latest album, Mala in Cuba (Brownswood Recordings). No awards for guessing the premise, but the results turn out to be different from what you might expect.

Mala is one of dubstep’s old-school guys, having co-founded the production duo Digital Mystikz with Coki and helping to organize the influential dubstep night DMZ in London. As one of the sound’s early mainstays, Mala has had the time to flesh out his own take on dubstep — percussion-heavy electronic dance music — through singles and remixes. Until now, however, an album-length statement had been missing.

Meanwhile, BBC Radio 1 DJ Gilles Peterson was busy seeking new angles for his Brownswood Recordings label. On intuition, he suggested Mala travel to Cuba to see what would happen. Mala in Cuba is the result. And it is as definitive a statement as Mala could have made.

Though it’s billed as a collaborative effort between Mala and local musicians, the process didn’t quite work like that, with Mala sticking to manipulating pre-recorded tracks rather than live tweaks on the fly. Even so, songs like “Changuito” or “Como Como” sound nothing like Skrillex. The bass is stunning but drops are hard to come by. Percussion and the rhythm section both get their due.

But the best thing about Mala in Cuba may be the way it reconciles dubstep’s to its Caribbean soundsystem roots. Mala gives listeners a doorway into his Cuba. More importantly, he supplies evidence of what dubstep can do when pushed outside its comfort zone.

For a genre that’s covered so much ground already, it’s reassuring to know there’s still unexplored territory. Mala in Cuba is both a realization and a realizing of potential, both of which make it essential.