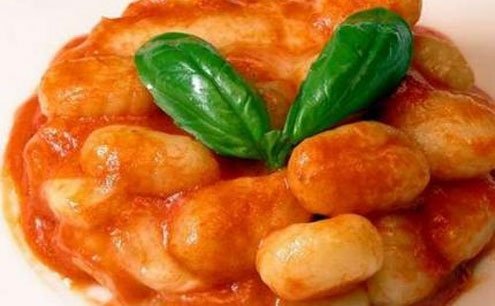 The word gnocchi has Germanic origins — it meant a "lump" or a "knot."
I

talians are set in their ways. Romans especially. They still spend time with grade school friends. They often return to the same vacation spot every year. They swear by favorite coffee bars and pizza joints. The tunnel narrows more when it comes to food: Thursday is gnocchi day; Friday is all about fish; and Saturday calls for tripe.

Though Catholic law has been eased so that Friday meat-eating is banned only during Lent, some Italians still adhere to the rule. Friday remains a big fish day, with cod — baccalà — featured (though any fish will do).

Gnocchi served on Thursday was a later addition to the practice, with the dumplings serving as a final heavy meal before Friday’s fish. Since gnocchi are traditionally made with potato and flour, they’re more filling than regular pasta.

Why tripe was added as a Saturday follow-up is less clear. My own guess is that tripe was seen as representing a hearty way of making up for the lost meat day. I would have picked a thick steak, but to each his own.

So far, I’ve had little experience cooking up tripe or baccalà, but gnocchi — which I make from scratch — is another story. Like most classic Italian fare, the dish requires only simple ingredients and isn’t hard to prepare.

The word gnocchi has Germanic origins — it meant a “lump” or a “knot,” based on dough’s irregular shapes. A fragmented 14th century manuscript contains the oldest recipe, though by the 18th century the dish was well known. It didn’t become a Rome staple until about 100 years ago.

In poor Rome, gnocchi were made from whatever the cook had at hand, whether ground chestnuts or stale bread. Today, they get their start from good potatoes (yellow-fleshed Yukon gold are ideal). After that comes a little flour and salt.

Start by boiling the potatoes until soft — about the time the skin starts shedding and they split when you stick a fork in them. Cool the cooked potatoes on a drying rack or a cutting board.

Getting lightness and fluffiness out of each gnocco (the singular form) depends on skinning and mashing the potatoes while they’re still hot, thus letting more moisture escape. Keep testing the potatoes, peeling them as soon as your fingers can bear the heat. It’s admittedly hard to catch that moment unless you live in the kitchen, but trust me when I say it makes a huge difference.

After peeling, mash the potatoes with a food mill or a similar kitchen implement. Sprinkle a reasonably large portion of counter space with flour. Ideally, use a large wood board to give the gnocchi extra texture. Lightly knead the potato together with flour until the mixture holds it shape nicely. The dough should be soft and supple when you’re finished.

At this point take handfuls of dough and roll them into cords about 1.5 cm (.6 inches) in diameter and about 30 cm (12 inches) long. Cut the cords into pieces about 2 cm (1 inch) long and press one side of each piece on the tines of a fork, leaving small ridges to catch the sauce.

Gnocchi cook very quickly, about two minutes in well-salted boiling water. You know they are done when they float to the surface. It’s important not to cook too many at the same time since they tend to stick together. Once they’re cooked, toss with the sauce of your choice and eat immediately.

Traditionally, Roman gnocchi get a simple tomato and basil sauce, while in Genoa pesto is a common addition. Tuscany gnocchi often come with a hearty meat ragú. A friend of mine swears by butter and sage.

“Ridi, ridi che mamma ha fatto gli gnocchi!” (“laugh, laugh because mom made gnocchi!”) goes a popular Rome saying. The idea is that making gnocchi takes time and care, which suggests their serving is part of a special occasion. Whether the laughter is because of the occasion or mom’s gnocchi we’ll never know.