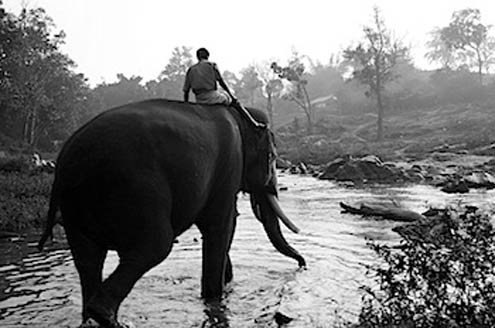 Anytime the six-ton Elephant and the Rider disagree... the Rider is going to lose. He's completely overmatched.
I

Though most voters insist they’re weary of the same old storylines and same old faces, they also tend to ignore novelty.

Take Fare per Fermare il Declino (“Work to Stop the Decline”), a fast-growing grassroots movement lead by journalist Oscar Giannino. Giannino’s 10-point platform of clear and simple ways to kick-start Italy’s lagging economy and weak civil society gets many voters excited, but many eventually lose heart and turn back to established faces. The reason is resignation: “It would never work here.” “People don’t care.” “Italians will never change…”

But built-in defeatism is just what fires up American brothers Chip and Dan Heath, business teachers and the authors of “Switch: How to Change Things When Change Is Hard.” In the best tradition of American pragmatism, the Heath brothers amass quality research and use international examples as a means to approach to complex problems.

At the heart of the Heaths’ book is a metaphor developed by psychology professor Jonathan Haidt (“The Happiness Hypothesis”) that seeks to explain human duality. Haidt writes that humans are one part rational, conscious and prone to long-term thinking; another part irrational, emotional, instinctive and short-term. Haidt fashions a suggestive image to make his point: that of a rational and conscious “Rider” poised atop an irrational and emotional elephant.

The Heaths respond to image by saying change requires that both rider and elephant work together. Otherwise, they write, “Anytime the six-ton Elephant and the Rider disagree… the Rider is going to lose. He’s completely overmatched.”

To get the Rider and Elephant to work together, the Heaths suggest a three-pronged strategy: Directing the Rider, motivating the Elephant, and shaping the path.

“Directing the Rider” means finding bright spots-or situations where something works-copying them, scripting moves so they take root, and pointing to a destination or choosing a concrete and measurable goal.

“Motivating the elephant” means making people feel (not just think) change is necessary. It means breaking change down into small steps that won’t spook the elephant. It also means creating a new identity and mindset that make change feel natural.

“Shaping the path” means making environmental adjustments that modify behavior, building habits so that the new behavior becomes unconscious (like brushing your teeth), and “rallying the herd” or making new behavior contagious.

Now let’s put this in an Italian context.

First, let’s find the bright spots: Though Italians think they are pathologically incapable of paying taxes, that might not be true. Economist Giulio Zanella says that among the self-employed, the U.S.-Italy tax gap- the difference between what’s owed and what’s paid- isn’t particularly striking (55 percent versus 52 percent). Some categories pay more systematically than others. Doctors pay more taxes than architects; domestic workers more than homework tutors. The idea would be to find out who pays and why, and get the deadbeats to imitate them.

Script the moves: Think of IMU, the property tax reintroduced by Prime Minister Mario Monti (a previous property tax known as ICI had been abolished by then-leader Silvio Berlusconi). Italians might have been more willing to pay if the government had published the new guidelines on time and explained them more clearly. Italians might have felt better about a new tax if the destination of the cash had been unambiguous and verifiable — something that citizens care deeply about, such as better healthcare or teacher salaries.

Motivate the elephant: Perhaps instead of generic talk about decreasing evasion overall, which seems unattainable, Italy could set small well-defined and quantifiable goals, such as raising compliance in lax regions to levels that are standard in other regions. Or it could aim to reduce the tax gap by a specific but modest amount. Perhaps the government could challenge sneaky tutors (notorious for tax evasion) to pay as much as housekeepers and the elderly caregivers known as badanti. Perception and identity, say the Heaths, are essential tools.

For example, hotels were able to convince guests to reuse towels by telling them that most people did so. Underage drinking drops at colleges whose leaders tell students that the majority of students do not drink.

Italians need to be reminded that most citizens do pay their taxes. If Italians perceived and saw themselves as the hardworking taxpayers they actually are, more would pay up. Global perception would also change, which in turn could improve the country’s ability to borrow on international markets.

Shape the path: Italy could change its bureaucratic environment to make paying easier. It could reduce the sheer number of taxes paid — on televisions, trash collection, cars, and so on. What if Italians got their tax forms in the mail instead of having to purchase them in shops? In the U.S. “designated driver” was an unknown concept until the late 1980s, when a Harvard professor convinced the producers and writers of 160 primetime programs to introduce five-second, designated-driver moments into scripts. After three years, nine out of ten people were familiar with the term. What if Italian shows included similar bytes?

When comparing their country and its flaws to the U.S., Italians often say “But we aren’t like you.” But I always respond by reminding them of their own proverb Tutto il mondo è paese (“The whole world is a village.”) If the Heaths’ approach works in places as diverse as Vietnam, the U.S. and Tanzania, then it should work in Italy.

In the end we humans are sadly alike the world over. We’re all just poor struggling Riders trying to guide our Elephants.