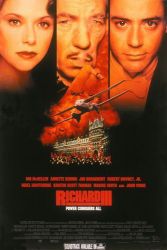 Director Richard Locraine’s film is imperfectly mad and deviously brilliant. It’s the National Theater adaptation of Richard III spiked with adrenaline and hammered into a modern setting. Ian McKellen (who wrote the adaptation) is the Shakespearian zealot in a 1930s faux-Fascist England where Richard’s House of York and the Lancasters are pitted in civil war. Shakespeare, of course, plays to any period, and arrogance and pretense are timeless. Whether Loncraine does the bard a favor is open to interpretation. What isn’t is McKellen’s rousingly passionate performance as throne-or-bust Richard, who revels in tanks and planes and killing at will. “I can smile, and murder while I smile,” sayeth Richard, all the more reason for McKellen to pick the Oswald Mosely 30s. Here is Shakespeare presaging World War II, with wit to spare.