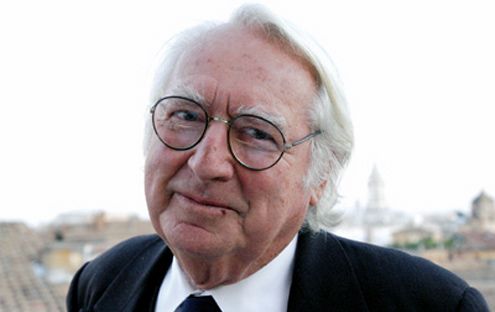 American architect Richard Meier is in Rome to stay. He drew national attention last year when his angular Church of Dives in Misericordia, located outside city walls, was inaugurated to a mixture of acclaim and bitter criticism. By 2005, Meier will complete a museum to house the Ara Pacis, built in 9 B.C. to honor Caesar Augustus.

Its location, beside the mausoleum of Augustus, means that Meier is creating a modernist structure along the banks of the Tiber – a move that has enflamed some critics who complain his structures betray the city’s ancient ethos. Stacy Meichtry met Meier in Rome.

You won the Vicariate’s contest to build the Church of Dives in Misericordia. Tell us about competitions.

The bad thing about a competition is there’s no exchange, there’s no dialogue between the architect and the client, there’s no exchange of ideas. You don’t begin and grow together. The good thing is that if you win, that’s what you build. There are no second thoughts. There’s no committee that comes in and says, “Oh, well that’s nice, but change this or change that. We don’t like this.” So it has its pros and cons.

For the Ara Pacis commission you were personally chosen by Francesco Rutelli, then mayor of Rome. Has that contributed to the controversy surrounding the project?

The project is caught in a political situation. Those who wanted to criticize Rutelli wanted to downgrade the project. Now, there’s no one left to defend it. Those in the Rutelli administration [1997-2000], have been replaced by people who are not as positive, because they’ve inherited it from a previous administration. So you’re in a political bind, because, although people may think it’s a worthwhile project, a terrific thing to do, architecture is used for political purposes – in Europe much more than in America.

So Rutelli came to you because he wanted a modern building in the heart of Rome?

Rutelli realized Rome isn’t just a museum, not just a place where people come to look at the past. It also has to be a living city, a vibrant city, a city that looks to the 21st century. Therefore there has to be something that says we’re not just interested in the past; we’re interested in the future as well. And I think that’s what’s great about this project. It’s the first modern building in Rome since World War II.

What would you say to critics who say you’re disfiguring their past?

The Ara Pacis was moved by Mussolini from where it was to where it is. He moved it there because he wanted it next to the tomb of Hadrian. He thought he’d be buried in the tomb of Hadrian so he wanted this great monument next to him. It was a terrible idea to move it, because he moved it next to the Lungotevere. The air pollution and vibration from all of the automobiles along there was shaking and actually destroying the Ara Pacis. The building it was housed in, which was built in 1937 or ’38, just wasn’t adequate. So there wasn’t anything to restore, because it wasn’t that important of a building.

Your blueprint calls for a building eight times the size of the monument.

It’s eight times because there are artifacts that are related to the Ara Pacis that need room for display as in a museum. And there will also be an auditorium.

Have you made any major changes to the original design?

There were some modifications made because there were objections to a wall that closed the space off from the Lungotevere.

So you got rid of the wall?

We got rid of the wall.

You once lived in Rome an architecture student. You must have enjoyed the anonymity.

I first came to Rome when I was in architecture school at Cornell University in the summer of 1955 and spent three or four weeks here. I came back again after I graduated and spent a longer time. I remember before I left New York, I sent letters to a number of architectural firms there, trying to get a job. And most of them said, “Come in and show us your work.” I should have gone and carried my portfolio with me, but I thought, “Oh well, I’ll work in Europe.”

So I came to Rome and carried my brochure and met architects. And while I was here I remember I got a response from Marcel Borero’s office in Manhattan, saying, “Okay, we have a job for you. Come and start next Monday.” And I’m sitting here, looking around and saying to myself, “You know, I’m not ready to go back to New York.” So I wrote them back and said, “Thank you very much for the job offer, but I’m in Rome and I’ll probably be here for another month or two. So, you know, if you could hold the job for me, I’d be happy to do it when I get back.”

Did they hold the job?

No (laughs). But I just couldn’t see leaving Rome at the time. I eventually came back as a visiting architect at the American Academy in Rome and spent a year on and off in 1976. That’s when I really got to know it well. I had my own practice at that time, and I was working alone. I thought I couldn’t get up and leave for an extended period of time, so I’d spend two weeks in Rome, two in New York, back and forth. But you come for two weeks and it’s almost two weeks just to settle in. I never got anything done, because I was always coming and going. Well, it’s hard to get things done in Rome anyway.

It’s Roman time (laughs.) But, I mean, Rome really is a hard place to work, whether you’re an architect working on a project or a painter or a sculptor. I mean, you have a nice lunch and by the time you get back to work it’s four or five o’clock.