Portrait of a Lady 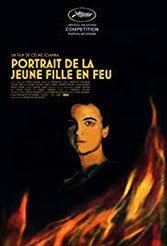 Forbidden love has, of course, always been a staple of fiction. It allows us to indulge our greatest desires and fantasies. It also suggests human bonds can transcend limiting social norms. Only in recent years however, have love stories overflowed their longtime heterosexual restraints. Anng Lee’s 2005 “Brokeback Mountain” blazed a path that would lead to award-winning films including “Moonlight” and “Call Me By Your Name.”

French director Céline Sciamma’s “Portrait of a Lady on Fire,” her fourth and finest film (after “Tomboy” and “Girlhood”) follows this open-minded pattern by presenting a tale of enduring love told almost entirely through quiet gazes and words left unsaid.

In remote 18th century Brittany, artist Marianne (Noémie Merlant) is tasked with painting a portrait of young heiress Héloïse (Adèle Haenel), who is due to be married against her will to the man who her sister was set to marry  prior to her suicide. Héloïse’s initial lack of trust in her portraitist, combined with the formal nature of the rapport, means that for much of the first half, Haenel adopts a harsh, unfriendly scowl and the interaction between the two women is curt and less than friendly.

We only gauge the deep-lying fondness forming between them in swift glances — when one of the two is looking away or when they exchange brief informalities in speech when the two women get a moment alone, away from the prying eyes of Héloïse’s controlling mother.

The impersonal nature of Marianne’s relationship to Héloïse has an impact on the former’s work, and dissatisfied with her end product, she sabotages her own painting. It is only once she begins her second attempt, while Héloïse’s mother is away on business, that her artistry and the emotions of both women are finally allowed to flourish.

It is difficult to explain the brilliance of Sciamma’s new feature, because you only realize its gifts during the film’s heart-stopping final moments. It’s a slow-to- build drama of repressed emotions. Sciamma does not pander to her audience, which is left in constant suspense over the end result of the deepening feelings. Haenel in particular is exquisite. She perfectly conveys the gradual softening of Héloïse’s tough exterior as she allows Marianne’s love into her heart. “Portrait” is one of the year’s great films and confirms Sciamma’s place as among the most exciting film-makers working today.