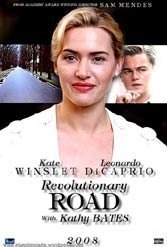 In their 1950s suburban Connecticut neighborhood, the Wheelers are special: young, beautiful and ever-so-slightly bohemian. April (Kate Winslet) reads serious literature and still harbors aspirations for her life to be extraordinary. After a humiliatingly bad performance in a local play (she’d wanted to be an actress), she convinces husband Frank (Leonardo DiCaprio) to leave his boring job in the city and move to Paris. There, the plan is, she’ll support the family as a secretary and he’ll take time to discover his passion.

Suddenly, their tension-filled marriage is transformed into one of erotic complicity. It’s complicity, though, that through lingering close-ups and subtly registered gestures, we’re made to understand won’t last. The unravelling is anguishing and portrayed by both actors with raw intensity. As the trapped housewife, Winslet reels from pent-up rage to wild optimism to disembodied self-mollification. It would be easy for Frank to become the patriarchal fall-guy (and indeed, when his ultimate betrayal comes it is of the most devastating kind), so it’s to DiCaprio’s credit that you feel almost as much sympathy for his internal plight as April’s. Frank is out of his league with April, but trying hard.

Director Sam Medes’ film (“American Beauty,” “Road to Perdition”) isn’t without faults. The scenes in which an institutionalized neighbor John comes to visit feel mechanical, inserted for counterpoint. The ending in turn feels like a classic cop out. And while white, middle-class children of the 50s certainly didn’t garner the obsessive management of their personal development that children do today, the two Wheeler kids are so notably absent that it’s not until half-way through the film you realize the Wheelers have kids. (From then on, I worried about where they were all the time.)

Still, it’s the rare film that lingers in your mind for days after, that leaves you mulling over the ways in which our own times shape our choices and dreams, and how, decades from now, we’ll look back on them.