Revolution in the offing 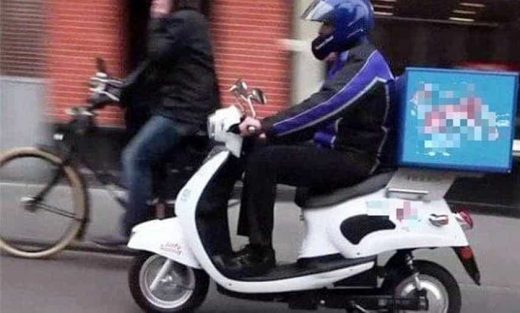 Food-delivery scooters are now omnipresent on the Rome scene.
I

t’s a question about something few ask, as if the subject were the holy grail: Will Rome soon become another New York City or Los Angeles, where residents can, and do, get just about everything they eat delivered to their front door?

All signs suggest the city is moving in that direction.

Online companies offering to pick up and home deliver food are proliferating all over Italy. But this isn’t old school take-out, in which the restaurant mostly limited itself to packing and sending the food, something Chinese restaurants pioneered decades ago in big city America. But now, both in the United States, and increasingly in Europe, specialized food delivery services have emerged and are now busy carving out a surprisingly large chunk of the food market. These companies broker deals with restaurants, generally receiving small commissions for their delivery services. Clients pay an additional order fee, balancing out the commercial equation.

Delivery proceeds are then divided between the delivery company and its drivers on an individual basis.

In Italy, these are usually youngsters on bikes or scooters, charged with hauling branded thermal containers the size of a bedside table.

When Italian Amazon first introduced food delivery services in mid-2015, many voiced skepticism, wondering how Italian dining culture could absorb something that ran against its nature, particularly on a large scale. How would those who roll out their own tagliatelle and swear by their mamma’s cooking, a suspicious lot, respond to the trend? Rome is a place where some people still covet their address and apartment number. It’s also a city where cash plays as powerful a role as credit in basic transactions.

But the results are in, and they suggest a generational change.

Home food delivery is no flash-in-the-pan. It will fundamentally alter the food service landscapes, and lead to a monumental change in the restaurant industry.

Younger Rome residents, singles and lazy cooks are already hooked. Home delivery is thriving and shows no signs of letting up.

Though Italian traditionalists might reject the notion of eating on the sofa, Netflix has their number. The streaming service, now in Italy, has all but legitimized U.S.-style casual dining. Solo or part of a social gathering, binge-watching now comes with chopsticks or pizza (a slice in hand is now cool). Fast-changing consumer habits have only accelerated the transformation. In a country where shoppers constantly seek out novelty and attentively follow U.S. trends, online and app-driven food delivery are a perfect fit. They also provide an opportunity to sample new restaurants and alternative cooking styles. Time-strapped Italian families and single diners are desperate to reduce mass transit or driving time (and parking costs), which makes ordering in an attractive fit.

Riding the wave of this stay-at-home trend, delivery services are booming, and competition is intense. Delivery time and restaurant portfolios are key selling points as consumers seek ever-wider food options.

Delivery services originally situated close to restaurant clusters and delivering only to certain areas of the cities have since expanded into full-scale businesses able to deliver just about anything anywhere in the city, proving again that profit and expansion tend to go hand in hand.

At the moment, Rome is covered by five major food delivery franchises, each one linked to companies that market and sell restaurant meals for homes and offices throughout Europe.

Just Eat is a London-based startup that mainly delivers pizza, Asian cuisine, Mexican food, burgers and kebabs. Orders can be placed online around the clock by typing in your zip code and selecting from a vast range of local restaurants that deliver in each area.

Foodora launched in Berlin in 2014, providing home orders from high quality restaurants that normally don’t deliver. Available in Milan and Turin in 2015, the service expanded to Rome and Florence in 2017. The company’s focus is on punctuality, boasting an average delivery time of 30 minutes.

British company Deliveroo recently expanded to Rome after enjoying success in Milan. It delivers meals from neighborhood trattorias as well as larger chain restaurants. Register on the app, select restaurants, place an order, and and track riders in real time.

Stuck at home with the flu and urgently need aspirin (or dishwashing suds)? Or maybe it’s a macchiato in bed you want. Glovo delivers it all. In addition to food from local trattorias and fast food joints, it also delivers from grocery stores, drugstores and coffee bars. Wait time is short. As a bonus, all Glovo orders can be submitted immediately or scheduled for a later time.

The range of what’s available has come a long way from just pizza, and is expanding to suit even arcane tastes.

Among the newest additions to this growing list is UberEats, operated by the U.S. limo behemoth. It is unrivaled in the world of online-app GPS-operated services in the so-called “sharing economy.”

At this rate, consumers may soon expect restaurants to have their own apps and start wanting more delivery service options, including automatic meal deliveries that users can schedule ahead of time, think Monday evening when the boys have calcetto practice, or at other times when the anointed house cook is too busy. Shoppers with dietary restrictions may also be interested in customizing menu items, choosing —or excluding —specific ingredients. Meal delivery services will soon make many of these options available on their apps. In order to survive, restaurants will need to update their websites to include automated services.

At least some local restaurants are likely to add Facebook ordering as a way of increasing revenue. In addition, so-called “ghost kitchens,” restaurants that cater solely to the takeout market, are likely to crash the party.

Home food delivery is no flash-in-the-pan. It will fundamentally alter the food service landscapes, and lead to a monumental change in the restaurant industry. Not every restaurant will jump into delivery fray immediately, but all will have to deal with delivery demands sooner or later. Even in Italy.