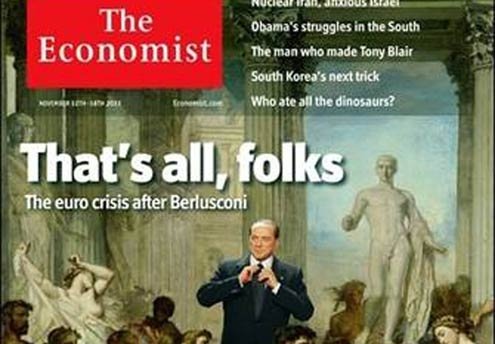 The Economist has just about run out of fuel.
N

ever a day begins without British media sighing at the latest antics of the Italian political sphere. Back in the Silvio Berlusconi days, magazines and newspapers relished placing the former prime minister’s beaming face on their covers, accompanied by block capital lettered headlines that screamed of scandal and shame. How could Italians put up with this buffoon? What was wrong with them?

Marco Travaglio and Beppe Severgnini, two leading Italian journalists, have made a career of explaining the Italian mind-set to confused Britons. Severgnini’s recent “Mamma Mia! Berlusconi’s Italy Explained for Posterity and Friends Abroad” is a case in point. In it, essayist Severgnini humorously and substantively describes the reasons behind the Italian psyche and their adulation of a man they deem “misunderstood” abroad. “Italians are pragmatic,” he writes. “Before selecting what they think is right, they take what seems useful.” Well worth reading, the book makes it that much easier to understand why Berlusconi survived as long as he did.

So what was the British media’s reaction when Berlusconi finally left the throne? Most of it was thrilled, with The Economist running a piece entitled “Mighty Monti,” referring to Italy’s new technocrat Prime Minister Mario Monti, a former European Union commissioner (The Economist and Berlusconi had been locked in a decade-long blood feud that included law suits, a quarrel that began with the magazine’s famous 2001 cover story: “Why Silvio Berlusconi is unfit to lead Italy.”)

But some British media, I’m sure, were disappointed to see a high-caliber and respected candidate taking on the reigns. What would they write about now that they actually had to deal with a serious leader instead of a man who enjoyed hosting bunga-bunga parties and whose boisterous antics helped sell their publications?

Thank god, then, for Umberto Bossi, leader of Lega Nord, the Italian political party that stood by Berlusconi’s side for nearly two decades. Bossi, a man who made his career by claiming that Romans were thieves — Roma Ladrona was his slogan — was recently shamed by allegations he pocketed money intended for the party. He resigned, as did his son. Charges of cronyism are now rampant and the Lega Nord is in disarray. Again, the British media rubbed its hands in delight. Here was plenty of sellable material at their fingertips.

But the way that Italian expats living in London view this portrayal of Italian politics has also undergone a change. While Berlusconi was in power, most stayed quiet, knowing that any defense of the status quo would be met with a quick rebuke (rightfully so). Many were ashamed of what their country had become and yearned for a day when Italy would be respected again in major Western capitals. That day finally came when Monti took over.

Now, Italians in London are not so forgiving. Those who lived abroad during the Berlusconi years were forced to endure myriad insults against their country and gradually grew tired of having to defend Italian honor. It became exasperating to have to repeatedly explain that not every Italian voted for Berlusconi, resembled him, or revered him. It was hard to remind outsiders that many Italians denounced Berlusconi years ago, but received little publicity until criticism of him became fashionable. It was much easier (and let’s just say it, much more fun) for British media to paint a glorious Berlusconi-loving picture instead of digging into Italy’s more complex political and cultural reality.

Since Berlusconi’s fall, there has been a whiplash effect. Italians in London are now quicker to point out British media hypocrisies. The hacking and cash-for-access scandals that recently rocked the UK are cases in point. Revelations that British journalists tapped the phones of celebrities and other prominent figures quashed the ideal of transparent British journalism (and also led to the closing of the popular News of the World tabloid).

Add to that the cash-for-access scandal in which a Conservative Party fundraiser was taped telling fake donors how much they’d need to pay for dinners or lengthy sessions in the company of Prime Minister David Cameron. “If you’re unhappy about something,” party co-treasurer Peter Cruddas told reporters posing as potential donors, “we will listen to you and put it into the policy committee … It will be awesome for your business. You’ll be well placed.” Though Cruddas has resigned, the British political scene suddenly seemed anything but noble.

With Italy finally getting back on its feet, and with Britain recovering from a few blows to its own ego, the time has come for the British media to tone down it’s bias on Italy. Granted, Italy will always have its “colorful” figures, but it is also the home of many respected journalists, professors, engineers who develop ideas and work for a living. It is time to focus on them, and give credit where credit is due.