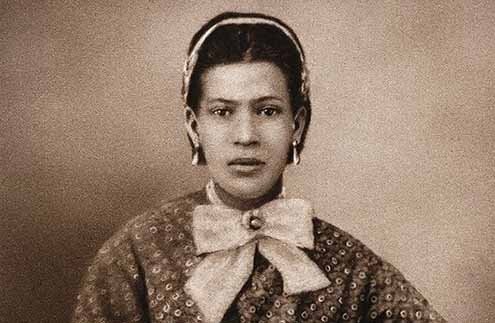 Renowned throughout New Orleans, Marie Catherine Laveau (1794-1881) was Creole practitioner of Voodoo.
I

’m biking into New Orleans’ French Quarter. The atmosphere is vibrant. Sunlight bathes the city in a golden haze, bright colors blurring all straight edges. At times reality seems to impersonate a more mysterious and playful persona. Carnival season has begun, and all is becoming stranger and more wonderful by the minute.

As I bike onto Royal Street, a man dressed in a red suit wearing a beastly set of horns suddenly steps in front of me. When I nearly hit him, he glares at me through red face-paint. This portent of evil doesn’t affect me. Instead, I yell “WATCH WHERE YOU’RE GOING!”

The devil is interrupting my commute.

New Orleans’ spiritual energies, humdrum to residents, remain a novelty to most visitors. Tarot card readers populate Jackson Square and esoteric shops litter narrow French Quarter streets. Tour guides add hyperbole to stories of hauntings and voodoo as they shout at groups of foreigners massed in front of the Andrew Jackson Hotel. Visitors to New Orleans assume that magic, if it exists, must come in dark and twisted forms. To outsiders, the city’s African origins shape a primitive and unrefined dimension. If you need to poison your enemies just pick up the right herbs from some sagging burlap sack.

I ponder the city’s legend and reality all the more because I’m about to leave it, nearly a year to the day I got here. But a New Orleans year can teach you a lot. You quickly become sensitive to the magic inherent in reality. The city itself, conjured from swampland, is enchanted. The natural world the city once sat on won’t release its grip. You learn to keep your eyes open. You become more sensitive to the animistic side of life that frontier land cultivates.

The religion of Voodoo flourished in Louisiana, eventually finding its way into a blend of Christian and Creole faith. Two centuries ago, the enslaved outnumbered white colonists two to one. Wealthy slave owners were an even more rarified class. This allowed families and groups of slaves to remain united, something that happened far less often in more established Southern white communities. Languages and customs were preserved, as was ancestor worship. Familial bonds remained almighty. The societal structure of early 18th-century Louisiana allowed West African slaves — mostly Fon people from what is now Benin — to hold on to their language and customs.

At the core of Voodoo faith are the so-called Vodun, or spirits. They range in hierarchy from minor spirits of trees, rivers, and the protectors of tribes, to major deities associated with forces of nature or of society. This animistic aspect of the faith — its focus on energies and governing spirits in every aspect of life — is what many historians have explained away as magic. Tourists are fed that casual approach.

Fetishes certainly exist within Voodoo tradition. Muddy Waters sings of a John the Conqueror root: “My pistol may snap, my mojo is frail / But I rub my root, my luck will never fail.” The root was also associated with sexual powers (when dried, it looked like the testicle of a dark-skinned man). These amulets not only perpetuate a warped view of Voodoo but also neglect the more powerful side of the faith’s values — the way it sees hope, humor, and spiritual energy in everyday objects. Talismanic mojo bags, for example, reflect the complex and ineffable relationship between man and nature.

Yet Voodoo was both resilient and flexible. At its height, it was a compelling organizing force within New Orleans society. Atop the social strata were 15 Voodoo queens, Marie Laveau the most renowned among them. Most were freed slaves that often owned property and were considered religious figures. Black and white residents alike attended their ceremonies by the thousands.

The 20th-century re-branding of Voodoo transformed it into primitive, exotic if not kitschy folklore. The similarities between polytheistic Voodoo and monotheistic Christianity were set aside. Instead, the emphasis was on fetishes and amulets — though such symbols are hardly exclusive to so-called “primitive” religions. The Crusades introduced a massive trade in relics. For Catholics, objects associated with saints, limbs or locks of hair could possess fetishistic power. The functional similarity of the Vodun to Catholic saints permitted Voodoo to survive when slaves were under heavy pressure to convert from the colonizing French.

Reducing Voodoo to the sum of fetishes just perpetuates the colonialist mission, offending religious complexity and limiting any deeper understanding of the layered life of New Orleans. Through the lens of Voodoo, there are no chance encounters. It gives my brush with the man dressed as the devil a new meaning. A year in New Orleans teaches you that incidental events are not necessarily just that. It’s a city that gives you pause for thought. And I’m grateful for the 12-month enlightenment.