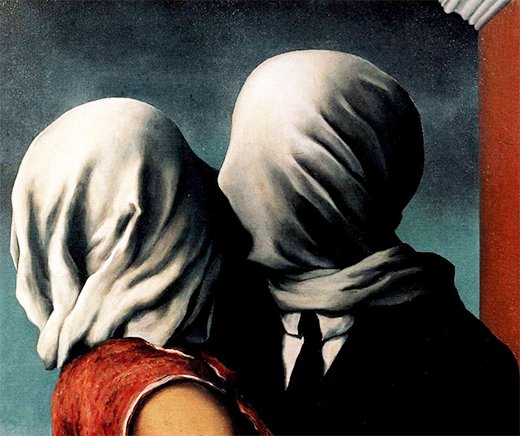 Marriage has its share of silences. It’s weighing how to respond that matters. Detail from "Les Amants" by Rene Magritte.
W

hat makes up individual mental health is a stormy enough topic on its own. But add the complications of a relationship, in which one plus one is supposed to equal two, as in greeting card harmony, and the gap between what was supposed to be and what is can turn wide in a hurry. I’m neither therapist nor expert, but I do know how to listen, and offer suggestions.

Q: I’ve been married for three years. We have a lovely little girl. I don’t think I’ve ever had a better friend than my husband. We’d often joke about not being newlyweds but court-anointed buddies.

In the last year, though, he’s stopped talking, or he talks less than he did. He spends a lot of time at home with his research (he’s a biologist), and the rollicking chats we used to have are a thing of the past. Before, whenever I’d ask him, “What’s up?” he’d tell me, and we’d talk it through.

These “chats” were serious, about his Dad, about feeling neglected as a kid, about feeling he needed to live up to some manly idea of success. We covered all this ground and more. It made us stronger. Now, all that is gone. He often says, “I’m fine, give me time,” which drives me nuts, since we’re in this together. The other day, I recommended couples counseling, and he seemed like he was going to explode, or cry, or both. In the end, he just nodded and said, ‘So we’re going.’ Now of course I feel like I’ve coerced him into doing something he clearly doesn’t want to do. At the same time, the silence in our home is deafening, and I don’t want our child to suffer whatever is going on in his head, or between us. Any thoughts?

A: As I said for starters, I’m no therapist, so consider these words as friendly thoughts from someone who’s been where you are.

Two things come to mind. First, married men with new responsibilities have an uncanny way of suddenly retreating into a shell, as if from that shell they’re protected from anything that might do them harm – even if there’s no harm out there.

Where there was confidence, doubt creeps in. Where all was once certain, little is. Add a child and a man can seem to acquire an entirely different personality, different that is from the guy you got to know and married. This is just about normal.

Obviously, it’s not normal from your side and no one, especially an intimate, can be just shoved out of a person’s life. Since you talked before, you should be able to talk now, even if it’s about not talking.

If that’s not happening, I can certainly see why you’d think of counseling. But beware. Though therapy has become a sort of bread-and-butter slice of life, it doesn’t necessarily open doors. A relationship facing its first major hurdle – a communications failure – may not yet warrant being taken down the counseling lane. Why? Because your husband (and your relationship, may not be broken (as in, “If it ain’t broke, don’t fix it.”)

He may well be hitting the first major obstacle he’s ever faced in dealing with you as a married couple with a child. Put another way, he may be in the process of having to reckon with growing up. All that conversation and banter you shared as lovers may not fit at this time. Silence may suit him instead. And, honestly, there’s nothing wrong with it – so long as he doesn’t continue to retreat.

This is a world of instant gratification, I know, and most people want whatever human dilemma they’re facing to be fixed ASAP. If not, they march into therapy looking for wise words or targeted meds. That approach doesn’t seem to me to give the human condition much chance.

We, men and women, husbands and wives, are allowed stretches of moodiness and doubt. They’re normal. They’re not intended to be repaired. They’re part of life, which is to say what matters is how people handle these moments of stress and doubt. You’d be surprised how being patient with someone’s personal “recession” can actually be smarter than Googling therapists (stressful to do and costly to pay for).

Since there’s no Advil on the market for marital distress, we tend to head out the door in search of a fix. I say, wait before leaving the house.

Keep talking, even to someone who, for now, won’t talk back. Stay away from applying additional judgment or pressure (this applies woman to man or man to woman). Let the person who’s retreated take stock, reflect, make peace. You’d be surprised how many seemingly marriage-busting phases end with someone walking into a room, saying: “I know I’ve been off these last few months. Let me explain…”

That’s when you start over. Marriage is a process that involves endless revisions, big and small.