They Shall Not Grow Old 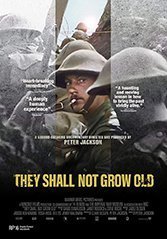 Young men shown enthusiastically enlisting for the chance to go to war – “I’ve never been so excited in my life,” one says – shape the opening scenes of Peter Jackson’s technologically pioneering World War I documentary.

The young men, some just boys who lie about their ages to join the military, revel in the adventure and male camaraderie.

Then comes trench warfare, and the horrors of war – its death knell for many ordinary foot soldiers – are revealed with gruesome realism. New Zealander Jackson, who made his name with the “Lord of the Rings” trilogy, doesn’t spare us the disintegrating feet, blown-up corpses, or bits of bodies.

The film got its start when Britain’s Imperial War Museum offered Jackson 100 hours of footage to make a documentary marking the 100th anniversary of the end of the war, which claimed the deaths of well over 10 million soldiers.

He took the celluloid to his special effects company in New Zealand. The main challenge for Jackson was to slow down the jerky, Charlie Chaplin-like footage to more life-like speeds. He ingeniously employed lip-readers to determine what the soldiers were saying and supplied those voices. Then he added voice-overs from interviews with more than 120 surviving war veterans whose recollections were recorded in the 1960s and 1970s.

“They Shall Not Grow Old” – most of the men we see in the film, in fact, did not – is an anti-war film, “celebrating” the end of what was then called The Great War. The final result, Jackson has said, “is that we see the war the way they saw it.”

Of course, we see combat the way the director wants us to see it. Jackson has chosen the arc of his film – from excitement to ennui to disillusionment at best, death at worst. And he has chosen the voices we hear. In his 1925 short story, “Soldier’s Home,” Ernest Hemingway presented another view. His protagonist Krebs recalls “all of the times [during the war] that had been able to make him feel cool and clear inside himself.” In talking about the war in his Oklahoma town, Krebs had to lie, falling into “the easy pose…that he had been badly, sickeningly frightened all the time.”

For all its human damage, war affects its participants in strikingly different ways. “They Shall Not Grow Old” (a sentence taken from a famous poem by Laurence Binyon), with its focus on trench warfare, gives us one perspective. That said, Jackson’s film is a tender paean to the men who sacrificed their lives, limbs—and sometimes, faces—for what others thought was the greater good.

When you are faced with death, a veteran says, “They say your past comes up in front of your eyes. I was only 19. I hadn’t had any past.”