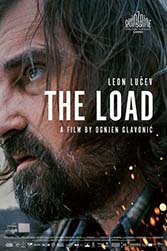 It is 1999. Serbian troops that have invaded Kosovo at President Slobodan Milošević’s behest are under bombardment by NATO aircraft. Ethnic cleansing of Muslim is rife and Serbia’s already maligned reputation is in tatters, with the nation seen as compliant before an autocrat’s killing spree.

Into this fractured scenario comes Vlada (Leon Lučev), a down-on-his-luck trucker who’s agreed to haul a load from Kosovo to Belgrade. But Thirty-something Vlada is not told what’s on board, nor does he press, apparently distancing himself from any sense of responsibility (but a reckoning will come.)

The genius of veteran Serbian director Ognjen Glavonić’s “The Load” (“Teret”) is in the way it burrows termite-like into an atrocious time.

Vlada’s route is a long and unfamiliar one, giving the director ample opportunity to build tension (what’s in the tuck?) and branch out into subplots that help frame personal and national turmoil.

There’s no soundtrack, letting the clunky truck “speak” and reveal. What, wonders Vlada, is that rattling noise in the back?

It’s youthful stowaway Paja (Pavle Čemerikić).Turns out both the older and younger man had relatives who fought in the anti-Nazi resistance. That was noble, but what about now? Is Vlada victim or accomplice?

Does it matter what the load is?

It does, yes, because Glavonić’s story is much about sins of omission, of collaboration by default, and the kind of collective guilt that doesn’t wash out. Vlada is a decent working man and Milošević’s atrocities he died in 2000 while on trial for war crimes) are mostly carried out by the police, army, and various militias.

Yet the larger crime can’t be separated from a see-no-evil citizenry. Willful ignorance and fear anchor the film’s moorings, and over time it becomes a lethally effective thriller.

At one point, Vlada sees a bust of Milošević in a police compound. A casual sighting? Hardly.

This is a movie that disrobes gradually, strip-club style, letting Glavonić reveal  the reek that still infests his memories, and the Serbian conscience.