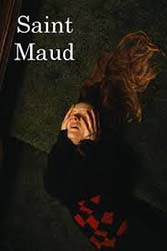 Using religion to reflect one’s own crippled psyche is not an original idea in cinema. Martin Scorsese has spent his career translating the complexities of his relationship with faith to the screen, most prominently in his collaborations with screenwriter Paul Schrader (“Taxi Driver,” “The Last Temptation of Christ”), not to mention Schrader’s own “First Reformed.” But in “Saint Maud,” writer-director Rose Glass uses religious obsession as a springboard for full-on psychological horror. The result is a striking, if overly ambitious, debut.

Opening in a dreary English seaside town, care worker Maud (newcomer Morfydd Clark) wastes no time voicing her disillusionment over what she considers an unfulfilled life.

“There must surely be more than this,” she pines, in conversational narration aimed at God himself, whom she believes herself to be in regular contact with. We eventually discover, through fragmented flashbacks and a chance meeting between Maud and an acquaintance from her less-than-devout days. It turns out she began seeking solace in God only after a major life reversal. Her quest for atonement takes shape in the form of a new patient, faded dancer and cancer patient Amanda (Jennifer Ehle), whose soul Maud feels duty bound to save.

It is the style with which Glass approaches this nominally sad story that first catches the eye; the shadowy lighting and abrasive sound design visually and sonically transform an otherwise morose drama into full blown horror. The chemistry between Clark and Ehle only adds to the uneasy atmosphere. Clark’s youthful looks and timid presence suggest innocence, yet Maud is always on edge, her psychotic switch ready to flip at any moment. At the same time, Ehle’s sardonic delivery and attitude toward Maud’s devout faith almost dares Maud to go over the edge. They clash, of course, but there are moments in which the two seem like a perfect match, albeit in their own twisted manner.

Unfortunately, the film begins to falter once Maud and Amanda fall out badly, as Maud vacillates between faith’s straight and narrow path and wild old ways that included binge drinking and promiscuity. The lack of any clear sequence of events makes the film’s second half flimsy. The game’s stakes vanish. Glass attempts to inject some ambiguity once Maud’s psychosis takes hold and the religious metaphors become more literal (she grows angel wings and also encounters someone she believes to be an embodiment of Satan). Sadly, it is always a little too clear that all of this is only in Maud’s head. Glass, who clearly doesn’t share Maud’s vantage point, is unable to make the viewer sympathize with the character’s plight.

Any debut with this much verve deserves notice and Glass could do wonders with a more structurally sound script in the future. As it is, “Saint Maud” remains a thought-provoking foray into the often unhealthy ways in which we view social life, and how faith, a seemingly normal aspect of that life, can make for a horror story if raised to the level of obsession.