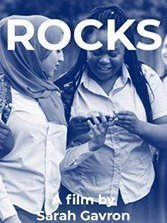 Stories of teenagers having to take responsibility for their younger siblings,after parental abandonment have become a film festival staple in recent years. The subject’s popularity — to the point of becoming a genre unto itself — is a damning indictment of 21st-century society. In most such stories, either economic inequality or poor mental health treatment (in this case both) leaves a vulnerable parent believing they have no choice but to abandon their young children. Government neglect of low-income citizens is an obvious undercurrent.

Here, teenager Olushola (Bukky Bakray), nicknamed “Rocks,” lives happily, if somewhat unstably, with her single mother (Layo-Christina Akinlude) and younger brother Emmanuel (D’angelou Osei Kissiedu) in their London council flat. One day, Rocks returns home to find a wad of cash and a note from her mother, explaining that she needs “time to think.” Rocks must then set out on a journey to make ends meet, doing anything she can to get her and Emmanuel from one day to the next. It’s a set-up that could easily feel overdone and morose, and director Sarah Gavron struggles to avoid such pitfalls.

What separates “Rocks” from the crowd is the joyous representation of friendship overcoming adversity. Rocks has a tightly knit group of school friends, whose early scenes together — ganging up on a teacher or playground dancing — create a realistic portrait of the bonds these girls have forged. Rocks’s oldest and closest friend, Sumaya (newcomer Kosar Ali), a quick-witted, wise-cracking Somali girl, not afraid to speak her mind and who clearly would do anything for her best friend, is particularly engrossing. Ali is superb in the role.

Though low-budget dramas help illustrate growing social and economic inequality, they carry a burden. Audiences can be made to feel like children being forced to eat their vegetables. They may be good for you, but they still leave you to go to bed miserable.

Only in moments of unadulterated joy can you set aside woe and feel the characters as vibrant and whole. Thankfully, “Rocks” understands this.