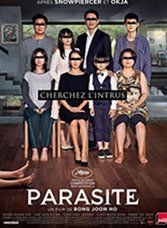 Beneath its science fiction veneer, the thrust driving Korean director Bong Jung’s 2013 mind-bending “Snowpiercer” was class warfare. The “abode” of apocalypse survivors was a sealed train condemned to endlessly circle the frozen globe. While the preening haves dined immaculately in front, the miserable (and miscreant) have-nots groused and schemed in the rear. Something has to give, and give it does, fire and brimstone aplenty.

In “Parasite,” Bong returns to the conflict, albeit with far greater restraint, delivering a sneaky social parable about outsiders seeking to escape menial life and carve out a space among the elite. If only that effort led to satisfaction, which in Bong’s mean world it doesn’t.

“Parasite,” opens with a downtrodden   family willing to resort to falsehoods and forgeries to land its son a place as a tutor in the home of a wealthy family. Son soon scams his sister into the picture, appearing to give the opportunistic have-nots a chance to play on a level field with the envied rich.

But Bong has tricks up his sleeve, and little will ultimately play out to anyone’s satisfaction. Envy makes monsters and monsters do ugly things. Yet there’s no sense of the unrevealing to come when Ki-woo (Choi Woo-shik) starts tutoring Da-song (Jung Hyeon-jun), the teen daughter of Mr. Park (Lee Sun-kyun) and polite wife Yeon-kyo (Jo Yeo-jeong),all of them seemingly good-hearted folk. The Parks’ gated community home makes Ki-woo’s basement dwelling seem the epitome of squalor (drunks piss on their street-level windows.)

Problem is, the rich don’t revel in their wealth, a twist that makes wannabe outsiders even more hateful. “Money is an iron,” says Ki woo, “it smoothes out all the wrinkles.” And Ki-woo forages for those wrinkles. Bong thus sets up a collision course. Since Ki-woo and sister Ki-Jung (Park So-dam), who assumes the name “Jessica,” are parasitic frauds, the cinematic dance is much about how long the poor people’s put-on can last, and what happens to all involved when they’re exposed.

Bong’s film is a roller-coaster ride that ensures drama comes with equal doses of comedy and horror. It is Dickensian in the richness of its quirky characters – Ki-wwo’s mother is a former shot-put champion; Yeon-kyo’s little brother is obsessed by the likes of Sitting Bull

Once again, though, the class warfare theme is relentless. The rebellion aboard an artic train is replaced by a darkly dissolute face-off between two worlds with nothing in common but the uneven capitalism of which all the players are warped byproducts.