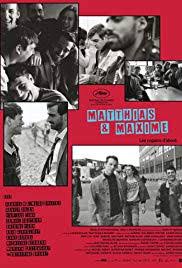 After failing to light the world on fire with his English-language debut, “The Death and Life of John F. Donovan,” prolific French-Canadian auteur Xavier Dolan returns to his native tongue with great success in “Matthias and Maxime,” the story of two lifelong friends gradually realizing the feelings they have for each other may surpass simple friendship.

Maxime (Dolan, back starring in his own features after staying behind the camera in his last three) is sick of his stagnant life in Quebec’s doldrums; he spends his days caring for his recovering addict mother (Anne Dorval) and covering bar shifts at the local strip club. His solution? Move to Australia and start anew, but not before one final lads’ weekend at a friend’s lakeside cabin. While there, the long repressed feelings between Max and his best friend Matthias (Gabriel D’Almeida Freitas) are reignited when they are asked to act in a sensual short film. These renewed feelings threaten to alter Max’s plans for his new life.

“Matthias and Maxime” is not particularly streamlined, and as a result the film is fairly messy. One moment the film is aiming for belly laughs and the next it asks you to empathize deeply with its characters’ emotional crises. And then there is Dolan’s signature characterful soundtrack, which can change the tone of a scene in seconds (though never to negative effect here). Max’s strained relationship with his mother is never directly tied to his feelings for Matthias, so it often feels as if two separate films are playing out simultaneously. However, Dolan’s excellent depiction of both aspects of Max’s life create such a delicate portrait of the character that it is near-impossible not to relate to him deeply.

Dolan’s young male protagonists have always been emotionally unstable hotheads. While Maxime fits this mold, he does not seem to hold grudges. Yes, he has to take refuge in his bedroom to shed a few tears when his mother (Anne Dorval) emotionally abuses him. Yes, he is reacts when Matthias makes light of his facial birthmark, but Maxime never lashes out as, say as Steve in ‘Mommy’ or Hubert in “I Killed My Mother” (both previous Dolan efforts) would have done. This feels indicative of Dolan as a filmmaker; he is just as sensitive to the fragility of human emotion as he always has been, but he may not be quite as volatile in his treatment of it. Perhaps this is a sign of growing maturity.