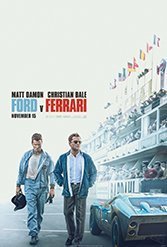 But for a twist of fate, James Mangold’s fine auto racing thriller would have lost its alliterative title. In 1961, American driver and designer Carrol Shelby approached Chevrolet with an idea for a radically new sports car. Chevy already had the popular Corvette so it turned him down. So Shelby, who, as a driver, had won the 1959 Le Mans endurance race, made his way to Ford, which took up the anti-Ferrari challenge.

By 1966, the year in which the film is set, the tough, Texas-born Shelby (Matt Damon) had finally motivated Ford to fully back his vision of the car. Easy it was not.

Implored to win by Henry Ford II (Tracy Letts), he created the GT-40 that Briton Ken Miles (Christian Bale) would drive in the 1966 edition of the race. At stake was not only the PR pleasure of defeating Ferrari but also a Ford scheme to buy out the prestigious Italian firm. When Ford gets a personal message from Enzo Ferrari calling Ford autos “ugly little cars” built in “ugly factories,” the blood feud is on. Ford’s in-house reply? “We will bury them…” — and then buy them out.

In fairness, this wasn’t David and Goliath, as the Hollywood side of the film suggests. Porsche was also a dominant force at Le Mans. But the Shelby-Ford story qualifies as high-level Americana.

Mangold brilliantly balances insider intrigue with stirring racing scenes. The charismatic presence of Damon and Bale does the rest.

Winning at Le Mans, considered the king of endurance races, required a car that could make it through 24 hours without breaking down, and drivers capable of doing the same. So the premise alone is heroic. Add to that a dose of Ferrari smugness (exaggerated) and you get a film about underdogs unwilling to bow to the odds against them.

But you also get a story that demonstrates just how nasty old school corporate infighting could get, and how meddling can wreck lofty goals.

Ford v. Ferrari is in many respects a bittersweet pill, since the result of the race falls short of an entirely happy ending.

“If you’re going to go around worrying about getting killed, you might as well give up racing,” Shelby wrote in his 1967 autobiography, on which Mangold’s story depends. At age 47, Ken Miles knew this very well, and 1966 was his final Le Mans.

Like a story about medieval knights, this is a tale of resolve before the age of safety and security intervened to save countless lives but veto the gladiatorial ferocity that auto racing once embodied.