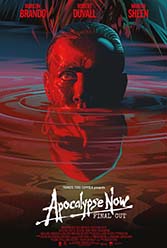 In 1969, the Rolling Stones released “Let it Bleed,” an album whose liner notes begged listeners to “Play it loud.” A decade later, director Francis Ford Coppola used The Stones’ timeless “(I Can’t Get No) Satisfaction” to throttle his Vietnam War masterpiece “Apocalypse Now” into high gear.

The original “Apocalypse” was a furiously ambitious attempt to create a link between the Vietnam misadventure and Joseph Conrad’s 1902 “Heart of Darkness,” an indictment of colonial barbarism and moral corruption.

Potent and timely (the ignominious war ended in 1975), the film — jagged edges included — seemed at the very least revision-proof.

So, what has Coppola got up to over the last two decades? Tinkering with the original to fatten up chapters cut from the 1979 release.

Adding the visually lush scene did little but mar the film’s full-throttle pacing. In another twist, Playboy models seen entertaining troops later have sex with some of them. The sex was rightly kept out of the original, since the scene already reeked of debauchery.

“Final Cut” (only time will tell if final means final) is an amalgam of the original and “Redux.” It also comes with a remastered soundtrack in the play-it-loud spirit, and tech-shampooed footage to make 40-year-old images more hospitable to lovers of 21st-century-pixels.

Does a wax job make a car seem newer? Yes. Is there such a thing as too much wax? Yes again.The first “Apocalypse” hinged on Willard’s surrealistic hunt for mystic outlaw Kurtz (who bore the same name as Conrad’s “villain”).

The jungle sparked a bad acid trip no one would survive intact. Kurtz’s feral dominion was situated between Southeast Asia and Dante’s Inferno, with some Hieronymus Bosch tossed in. Is Dante up for revision? Or Conrad, whose melancholy knew no end?

“Final Cut” comes in at three hours, shorter than “Redux” but longer than the original by a chunk. Coppola’s Achilles heel is the plantation scene. Without its French colonial leftovers, he senses a void — as if the folly of the U.S. war effort lacks punch without some mention of the failed French.

Yet the original was less about “why?” than demonstrating how purpose can become madness (making the movie gave Sheen a coronary and drove Coppola to the fringe of bankruptcy).

The first film was a jaw-dropping ode to pre-special effects cinematography and location-driven filmmaking (thank the Philippines) that immediately earned an important place in film history. While the septuagenarian Rolling Stones continue writing songs, old man Coppola, alas, is left to meddle with a hit that deserves better.