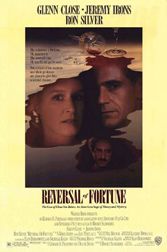 The Claus Von Bülow case was a 1980s media pet because it involved the rich, the aloof, and the decadent — soap opera’s twisted honor roll in a time before reality television had all that ground amply covered.

Barbet Schroeder’s uncanny movie, based on Dershowitz’s book of the same name. maps out the pre-appeal relationship between elitist Claus (Jeremy Irons) and the pudgy Dershowitz (Ron Silver). Their exchanges get Sunny (Glen Close) and various members of the Von Bülow clan into the story story. Schroeder jarringly uses comatose Sunny as a (non-omniscient) narrator.

Ethics are hardly the point; law is. Dershowitz, a Jew, doesn’t even know whether to take the case (“If Hitler calls me up, what do I do?” he asks his son). Von Bülow finds his conviction, well, tacky. And Sunny talks from her coma like she’s been embalmed.

But the movie is all about Irons, who rightly won a Best Actor Oscar (as well as a Golden Globe) for his faultless incarnation of pretentious amorality, a performance worth viewing repeatedly for its attention to detail. Once into Von Bülow’s haughtiness, Irons can’t or won’t let go.

For the record, Von Bülow won the appeal (Truman Capote testified on his behalf). Sunny died in 2008 after more than two decades in a coma.