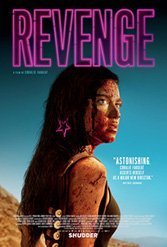 [dropcap]S[/dropcap]ome movies and even genres get a boost from current events. Steven Spielberg and George Lucas used the 1970s recession and its yearning for escapism as a platform for a bevy of Saturday Matinee-style movies that became global hits.

“Revenge” gets timely nourishment for the stream of sexual abuse charges that produced the #me2 Twitter movement and has produced a wellspring of male casualties. The film has a men-as-scum plot and a raped, gritty, get-even heroin who bleeds buckets but just won’t die.

Setting aside arterial quibbles, Italian model-actress Matilda Lutz plays Jen, an airhead blonde helicoptered to her married French lover’s remote American southwest desert villa for a sexed up weekend. What’s Jen’s ambition? She wants to be “someone” in LA, “where people notice you.”

Instead, Richard’s two visiting hunting buddies, Stanley (Vincent Colombe) and Dimitri (Guillaume Bouchède), notice her all too much (she dances provocatively with the former). Even hunky lover Richard — never mind cooing to his wife and kids on the phone — soon dons misogynistic colors. Rape and would-be murder follow, and given what Jen’s put through, that should be that. But it can’t be that, not after a rape scene in which Fargeat goes to great lengths to zero in on hateful Dimitri’s lurid, slow motion drooling on a candy bar. Reprisal must be served.

The problem is that the revenge tables turn on male terms only, violence reciprocated if not one-upped.

Jen survives of course, shocking herself back to life (and toward payback) thanks to some peyote the men gave her for safekeeping, Soon canyon prey is canyon predator, leading to an elongated series of chase sequence that snack on blood loss. Pink-nailed Jen patches herself up and learns to sheath knives and load a rifle. Take that, LA.

None of this is remotely credible, let alone particularly thrilling, since Fargeat tips her endgame early. But Lutz’s Jen is physically and psychologically resilient, her amoral hunters arrogant and overconfident, and the positioning of a sexually abused woman willing and able to fight back a neat bit of less-than-poetic justice in the post-Harvey Weinstein environment. The problem is that the revenge tables turn on male terms only, violence reciprocated, with Jen acquiring the ruthlessness of Arnie in “Predator” mode (or a feral, harsher “Barbarella” for the 21st century). Either lacking in self-awareness or just too shy — she’s closer to Lolita-lollipop than twenty-something — Jen doesn’t notice her sexual swagger. She has no idea she’s played with fire until Stanley comes unglued.

Yes, these are thoroughly nasty guys cruising for a dose of their own medicine (charming Richard gets lines like, “Women always have to put up such a fucking fuss.”). But using lurid schematics to ramp up indignation just courts hostile Close Encounters of the Gender Kind, with cruelty a constant on both sides.

In the end, “Revenge” is a one-trick pony with little to offer except having fortuitously happened onto a year in which rhapsodically violent payback for a host of wrongs seems somehow apt.