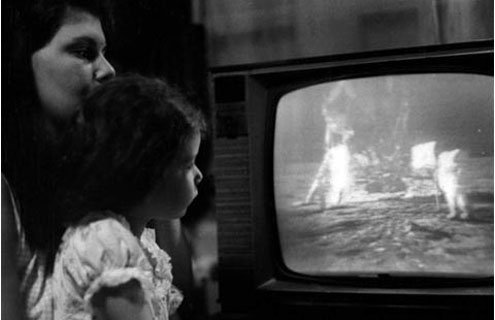 ust before the Moon landing, Chet told us about his first kiss. He had been hiding it, shyly, supposing we were distracted by the commotion. And there was commotion. In July 1969 we, a small brood of boys, were invited to grab our Kodak Instamatic 104 cameras if we wanted to record the landing. A television announcer explained that if we adjusted the ceiling lights and pointed the camera in just the right way, we could actually take a picture of the image on television. It could be, said Chet’s mother, as if you were on the Moon.

We didn’t believe her, of course, but we weren’t sure whether to believe Chet either. After all, he was gangly and awkward; no one liked the plaid way he dressed, we thought; no one, we were sure, liked that he took center stage, sweeping aside the day-to-day monotony and attracting attention only to himself. How he did this we were not sure. He spoke in class when, it seemed, little of cool to entrust.

At a student council meeting he had once pronounced the word relevant as revelent, which we considered hugely entertaining (those of us who knew the difference). He wrote a column for the student newspaper that someone called “self-begging,” which we assumed to mean “self-indulgent” (although we weren’t sure), and a group of us, bored and annoyed, wrote cranky letters to the school paper about him under assumed names.

So the question before the Moon, given these circumstances, was entirely simple: Why Chet?

Susan probably saw things differently, although, in retrospect, it’s hard to know exactly what she thought.

She was very blond and very smart and enormously dedicated to seemingly contradictory pursuits: the cheerleading squad and a correct understanding of Soviet Russia.

Soviet Russia, she had announced in a history class, stunning its participants, is an “important social experiment.”

Chet rolled his eyes. We rolled our eyes.

This was not, we thought, a well-advised remark. Nor was it in keeping with the times.

Soviet Russians, said Chet’s mother, expressing unusual determination while cooking small onions, are dubious people. That was all there was to say about that. They were simply dubious. They had invaded all sorts of places. China, for example. And Hungaria. The previous year, she added, the Soviet Russians had even invaded sent tanks to Parg, which we briefly thought was in Pennsylvania, before looking up Czechoslovakia, which we could not spell.

How do boys meet girls?

I still examine the night sky, abuzz in late solstice blue, and wonder about this.

We did not know it at the time, but Chet took walks. He’d walk from school to home, by the wide lane with the linden trees. He’d sit on the porch and try to figure out algebra, among the few subjects that baffled him.

We did not know it at the time, but Susan, after cheerleading practice, would walk down the same lane, her algebra secure, her history in search of a framework.

The Moon, said Chet, is a very important place, although you don’t know it — not yet.

Soviet Russia, said Susan, is a very important place, although you won’t know it unless it works — or doesn’t.

Somewhere in the middle they met, and walked, and talked. And kissed.

When Chet told us, we were dumbfounded. When Susan did not, we were intrigued.

On the July night that the two men landed on the Moon, we were huddled in a humid room amid flashbulbs and hubbub.

Chet arrived too late, his mother scowling, with Susan in tow. His eyes were wide and her soft lipstick was sweetly misplaced.

Where have you two been, demanded Chet’s mother, forcing age upon priceless youth.

— This reminisce was first published as “Important memories of Soviet Russia” in June 27, 2001 issue of The Prague Post.